The board of directors, pictured, of the San Francisco Pride organization held its monthly meeting for December last night, at the Eureka Valley Recreation Center and it was highly productive. However, I wish to make several housekeeping recommendations that would make meetings even more productive and keep more members engaged.

Since board members kept referring to different email addresses, it would help if they printed the addresses on the agenda about where to send follow up suggestions.

When referring to a printed page in the members' packet, take a few seconds to hold up that page for everyone to see, ask if we all have it in front of our eyeballs and then have the board member discuss his or her report. Last night's packet was 16 pages, double-sided, and at times it was difficult to follow what a director was talking about without being on the same page.

I estimate fifty people attended some or all of the two-hour meeting. What was so great was how practically everyone kept their comments short and to the point. Only once did I notice the stack monitor urge a speaker to wrap up his comments. There was much palpable goodwill in the room. Vice president Marsha Levine, the only woman on the board, expertly facilitated the meeting and keep it running smoothly.

Many were curious about where the board is in terms of hiring a new executive director, and without disclosing names of candidates or the final two contenders for the job, the board expressed confidence in making a hire by January 1st. President Gary Virginia shared details about organizational support in place to assist the new executive director when they begin the job.

The biggest laugh enjoyed by all, including Gary, was when he attempted to clarify why there are so many grand marshal slots and how they are chosen. Gary said there were four easy to understand pages in the Policies and Procedures Manual about grand marshals, and giggling started before he finishing saying "four pages" and he soon flashed a grin understanding our "Really?" reaction to his words. 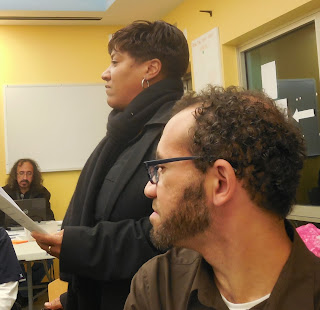 There were only six women in attendance including Lisa Williams, the interim executive director, seen here making presenting her report. It was her birthday yesterday and everyone wished her happy birthday. Nothing that there's anything wrong with lots of men showing up but I do wish more of our lesbian, bisexual and transgender sisters had come out last night. We need their voices to be heard and their ideas considered, and a serious expansion in diversity. 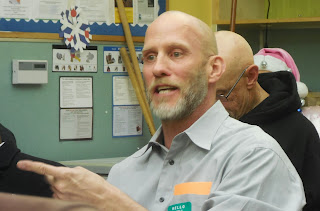 My good friend from our ACT UP/DC and ACT UP/NYC days Malcolm Greg Scott was present and offered excellent suggestions about amending the Policies and Procedures Manual. 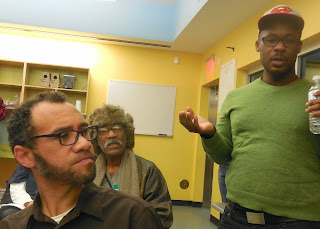 At the right in the green sweater is Shaun Haines eloquently making terrific points about diversifying the board's racial composition of members. To the left is Joshua Smith who has served in several capacities over the years at SF Pride. 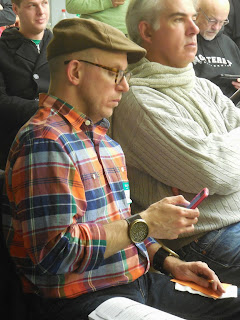 Here's Patrick Connors, known on Twitter among his many followers as @UppityFag. His tweets last night were less than usual and I hope that does not mean he's becoming less uppity.

There was discussion about the small amount of money SF Pride has in the bank and what is spent on the main stage at the Pride Celebration in Civic Center. Board treasurer David Currie welcomed ideas for bringing in more revenue.

During general public comment, I deplored the b.s. arguments of the Merchants of Upper Market Castro and their refusal to lower the rainbow flag at Harvey Milk Plaza to honor Nelson Mandela. After mentioning how many people were supportive of such an honor for him or perhaps raising the South African flag, there was a burst of applause that I hope was support for addressing the irrational GOP-like control of the public flagpole by MUMC.

As names were floated for speakers from the main stage and grand marshal, I suggested longtime peace and justice queer radical Tommi Avicolli Mecca for both slots. Please throw your support behind my buddy Tommi as the grand marshal selection process moves forward in the new year.

Finally, board member John Caldera received unanimous approval for concluding the meeting with a minute of silent appreciation and reflection for Mandela, and ending the evening in memoriam to the great humanitarian.

Cheers to all for a fabulous and productive meeting!
Posted by Unknown at 1:33 PM
Email ThisBlogThis!Share to TwitterShare to FacebookShare to Pinterest

Pride has an enormous money problem and the only real solution (I think) is for them to be funded by the City.

The parade has been bringing millions upon millions of dollars - and people - to SF for decades and the city coughs up a paltry $60,000 for the Committee.

My comments last night about wasting money on a CEO and the inevitable severance pay was responded to (unfortunately) after the meeting by Jesse. Without specifics, the pay for the next Earl Plante is based on the median wage for the city, which is something like $80,000.

As you know, in the LGBT non-profit world (let alone in SF) that's pocket change.

The difficulty will be not only in securing taxpayer funding but what that money would do to this weak and rickety organization.

Considering SF just flushed $5 million down the toilet for the stupid America's Cup yacht race - and they want to do it again - it doesn't seem unreasonable or excessive that the city could cough up at least $500,000.

That might help the organization actually raise money on its own by attracting talent and brains to increase attendance / participation...or it might give them the means to pay a handful of schemers a nice sum while they continue to book shitty acts like The Backstreet Boys and unknown D-list television stars.

Frankly....the options are depressing and they don't inspire me. Even with the presence of intelligent, informed agitators attempting to influence planning, there still remains an impulse to boil the event down to the lowest common denominator.

Thank you for the good review of the meeting, Michael!