A new annual 2012 HIV epidemiological profile was issued recently by the New York City Department of Health and it contains lots of good news about continuing declines of new HIV transmissions. Click here to read the 2012 report. 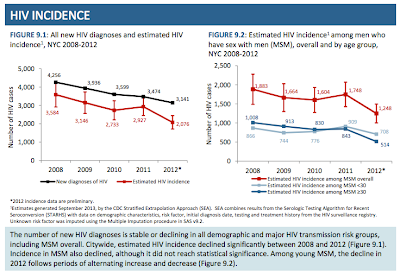 However, this NYC DOH chart, Figure 9.2, on the right, shows that for gays under 30 the rate of new infections has dropped. Overall, the red lines show declines. 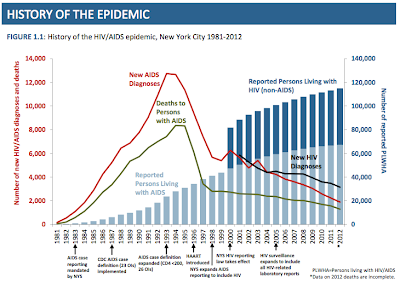 If you look at the lower right side of this NYC history of the epidemic chart, the dark blue line represents new HIV diagnoses and it continues to go down.

Since the DOH has not issued a release about the new report, I sent off the following concerns and questions to their spokeswoman Diane Hepps. She has promised to get back to me with answers by the close of business on Tuesday. What are your thoughts about the new NYC HIV stats?

1. When was the report published to the web?

2. Will DOH issue a release about the report's release, call attention to the damn good news that HIV continues to decline in NYC and remind folks that while drops are laudable, HIV is far from over? If yes, please provide details about when and if the answer is no, explain the reasoning.

3. How will DOH conduct public engagement -- town hall just on the report, say, at the gay center, agendized at appropriate advisory NYC panels, etc -- regarding the surveillance and stats?

5. The executive summary states that older white and Hispanic MSM, were also over represented among persons with acute HIV infection. What is this so? You also report the number of AHI cases is increasing, which means there are more older gays who are, in the report's words, "the leading edge of the HIV epidemic." Considering the focus of the CDC report on younger gays, it's jarring to say the least that in NYC it's not that population leading the epidemic.

6. Transmitted drug resistance has gone from stable to a sizable increase. Why is this occurring? Given the large range of treatment options available to newly infected HIV poz people, I wonder what sort of medical counseling they receive about deciding on a cocktail.
Posted by Unknown at 12:32 PM
Email ThisBlogThis!Share to TwitterShare to FacebookShare to Pinterest