Will NYC Mayoral Loser Quinn Give Unspent $1.3M to Charity? 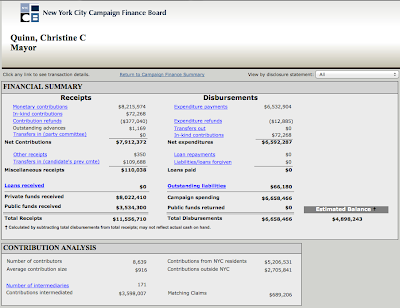 She finished a distant third in the Democratic primary for New York City Mayor, but she's sitting on a handsome sum of funds to donate as she wishes.

Out lesbian and soon-to-be ex-City Council Speaker Christine Quinn raised $11.5 overall for her campaign, according to the NYC Campaign Finance Board records. Just over $8 million of that was from private donors and $3.5 million came from public financing coffers.

As the year ends, Quinn has an estimated $4.8 million in the bank and after she returns her unspent public dollars she'll have $1.3 million to dole out, said a spokeswoman with the finance board earlier this week. The law requires Quinn to give back the public money by January 15 when she must also file her final paperwork with state, and after that she'll can donate disperse the $1.3M.

Quinn has several options for how to use that money, starting with rolling over it over into another campaign if she seeks another office. She can also issue refunds to donors, or write checks to other politicians or non-profit charities.

Even though I'm quite critical of high salaries and excessive overhead at local tax-exempt organizations such as God's Love We Deliver, the LGBT Community Services Center and GMHC, and lack of open board meetings or meaningful engagement with the public, I still would like to see Quinn give her war-chest to worthy queer charities directly reaching people and with reasonable compensation and full transparency.

A big note of thanks to my friend and longtime LGBT rights advocate Allen Roskoff for this news tip. What does he think should happen with all that money?

It would be really great if the money Quinn got from developers, landlords, Wall Street big shots, those expecting huge rewards and the rest of the 1%, had their money given to a worthy cause. However, I am not delusional. Quinn will do with it as she pleases, strictly in ways that will be beneficial to Quinn.

Let's what decision she makes in mid January about how to use her unspent funds.
Posted by Unknown at 3:01 PM
Email ThisBlogThis!Share to TwitterShare to FacebookShare to Pinterest