Is the Public Barred from SF Mayor's Tech Inc Committees? 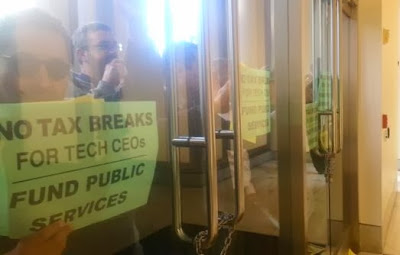 (Economic and social justice activists, and the general public were literally locked out, notice the chains on the door handles, from Tech Inc's meeting on December 16 with their puppet Mayor Ed Lee. Credit: Chris Roberts.)

This just isn't passing the smell test one bit.

Last Monday, the San Francisco Examiner's Jonah Owen Lamb reported on the invitation-only lunch meeting Mayor Lee has been summoned to attend with Tech Inc titans, held at One Market Street where Salesforce is headquartered. They're hosting the pow-wow As the photo shows, no efforts was made to bridge the yawning chasm between the mayor, his pals and average citizens. The Ex said:

But the meeting, which will be hosted by Silicon Valley investor Ron Conway and Salesforce, whose CEO has received recognition for his local philanthropy, is not meant to plot a counterattack to the growing backlash on the tech industry, according to Christine Falvey, the mayor’s spokeswoman. “I don’t think the mayor's interested in what the tech sector's image is,” Falvey said.

Oh, really? Are we to believe in Santa Claus too? At the end of week, on December 20 angel venture capitalist Ron Conway's vanity charity SF Citi released this self-puffery:

In collaboration with SPUR, the Salesforce.com Foundation, and the San Francisco Unified District, will launch committees [to examine housing, philanthropic and social responsibility concerns of tech firms].

So who exactly has established the committees and is in charge of them, Tech Inc or the mayor? More questions. Since SF Citi and Conway claim the committees are in partnership with the mayor and the Board of Supervisors, what sunshine provisions are built in to their structure? Who else is on the committees? Where are the MOUs guiding them? What about public attendance and comment at the meetings of the committees? The sound of crickets chirping.

One answer about when a meeting will take place comes from Andrew S. Ross who reported on December 21 in the San Francisco Chronicle:

It's not reactive, sure just like the mayor isn't concerned with Tech Inc's image. Anyway, the Chronicle broached none of my concerns regarding transparency of the committees.

Gee, with all this exciting news from SF Citi and the Chronicle the mayor's communications staff must have a lot to say about it all, and maybe address public engagement when the committees meet, right? Wrong. The mayor has issued no release or announcement about this development with Tech Inc.

Guess there's no need for the mayor, who started his tenure at City Hall's Room 200 based on the lie that he would be only a caretaker mayor and not run for a full term, to bring sunshine to the committees. He's apparently happy to allow his Tech Inc masters pull his puppet strings.

Something tells me these committees will do nothing to ease the class warfare taking place weekly on the streets of San Francisco. Expect more blockading of Google buses.
Posted by Unknown at 12:45 AM
Email ThisBlogThis!Share to TwitterShare to FacebookShare to Pinterest

A good government advocate has shared this important info with me, which I will use when I follow up on the committees:

(1) The Board of Supervisors;

(2) Any other board or commission enumerated in the charter;

(3) Any board, commission, committee, or other body created by ordinance or resolution of the Board of Supervisors;

(4) Any advisory board, commission, committee or body, created by the initiative of a policy body;

(5) Any standing committee of a policy body irrespective of its composition.

(6) "Policy Body" shall not include a committee which consists solely of employees of the City and County of San Francisco, unless such committee was established by charter or by ordinance or resolution of the Board of Supervisors.

(7) Any advisory board, commission, committee, or council created by a federal, state, or local grant whose members are appointed by city officials, employees or agents.