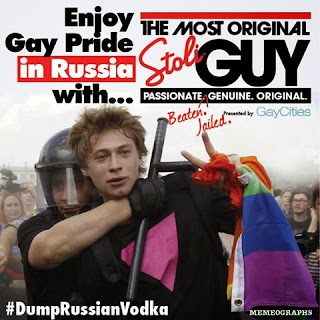 (A Russian police officer breaking up a gay rights rally earlier this year in St. Petersburg.)

Political reporter Carla Marinucci of the San Francisco Chronicle called today to ask what I thought of the Obama administration announcing two out LGBT athletes are among our country's delegation to the Olympics. As always, I want the celebrities to do a whole heckuva lot more than just smile for the cameras and talk about their careers.

There must be strong and unqualified visible activism from the United States delegates heading to the games, and activism that directly engages with LGBT Russian citizens. Sure, my quotes here pertain only to the gay jocks in the delegation, but we really need to have every member of it finding creative and forceful ways to showcase the lives and struggles of gay Russians. Will that happen? We'll find in February when the games begin.

From Carla's reporting at the Chronicle site:

The White House has named two prominent gay athletes — skater Brian Boitano and tennis great Billie Jean King — to represent the country at the opening of the Sochi Winter Olympics in February, a move that could spotlight growing protests over LGBT rights in Russia. [...]

San Francisco gay rights activist and blogger Michael Petrelis, who has reported on the protests leading up to the Sochi Olympics for months, says that the pressure will now be on Boitano and King — as well as other gay athletes, and UC President Janet Napolitano, leading the delegation — to make the Sochi games more than just an Olympics public relations event.

“What will the gay athletes do to protest Putin’s anti-gay propaganda laws?,” he asks. “Will they meet with LGBT Russians when they are there?” [...]

The law punishes anyone who “promotes” homosexuality to young people; critics have said that could extend even to athletes who bring rainbow flags — a symbol of gay rights — or who wear t-shirts or pins promoting LGBT rights. Others suggest that Russian LGBT parents may also become a target of prosecution. [...]

To counter, activists have called for boycotts of Russian consumer products and withdrawals of sister-city relationships and U.S. investments in Russia.

Petrelis, the Bay Area activist, has predicted the Winter Games are poised to become “a watershed moment for the global movement” toward LGBT rights.

Now he’s urging the athletes to take a stand — a big one. [...] “I’d like to see Billie Jean and Brian at a vigil for the victims of anti-gay violence in Russia,” he said. “I’d like to see them wave the rainbow flag outside the Olympic village with LGBT Russian at their side.”
Posted by Unknown at 10:14 PM
Email ThisBlogThis!Share to TwitterShare to FacebookShare to Pinterest