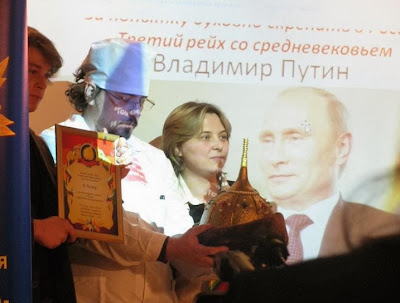 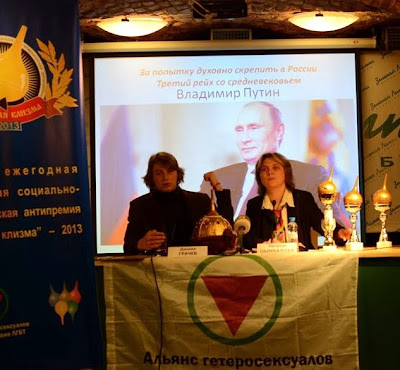 This news from friends in Russia had me cracking up with gales of laughter. Sure, here in San Francisco our LGBT Pride committee gives out the Pink Brick every June before our Parade and Celebration, to the politician or organization doing harm to queers and deserve to be publicly shamed, but we don't have a ceremony to bestow the Pink Brick on the "winners".

It's fantastic to see the Straight Alliance for LGBT Equality not only using this creative and satirical Golden Enema prize to attraction attention, but they also staged a mock ceremony with actual enema bulbs painted gold and took lots of photos of the event.

All this gives my activist heart great pleasure seeing such activism taking place, and that the straight allies know to document their fun, share the images with us Westerners and include a release in English. Carry on, with Pride and Love, LGBT Russians and allied friends!

The “Grand Prix” was awarded to President Vladimir Putin. The Golden Enema is an annual Prize established in 2013 by the social organization “Straight Alliance for LGBT Equality”. The Golden Enema is awarded to politicians and officials, athletes and journalists, and people working in culture and religion, for services to homophobia through their recent public pronouncements. This is the second year of this prize of disgrace and this week it was presented to a prize-winner in each of seven categories, plus one Grand Prix.

The winners were presented in absentia with their prizes – a golden enema and scrolls of dishonour mentioning their dubious achievements. Both items will later be forwarded to each of them by post. [...]

According to the organizers of the Golden Enema Prize of Disgrace, this year's competition was extremely stiff, and it was difficult to choose who had distinguished himself the most. Over the last year the social disease of homophobia has become an acute infection in Russian society. Whereas last year its epicentre was located in St. Petersburg, now the laurel crown has been won by the federal capital, for its success in making the policy of discriminating against and humiliating the LGBT community into a cornerstone of state ideology and propaganda.
Posted by Unknown at 8:55 PM
Email ThisBlogThis!Share to TwitterShare to FacebookShare to Pinterest

And our Russian friends awarding their Golden Enema Award deserve The Brown Spoon Award for stirring up shit.

In Sacramento we used to give the Everett Denman Brown Spoon Award for the best muckraker in town.