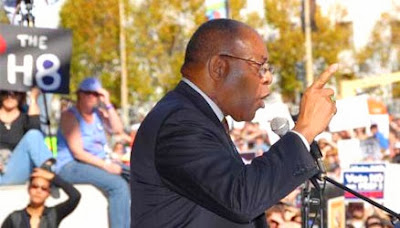 Today's San Francisco Examiner contained a story by Chris Roberts about Rev. Amos Brown remembering his meetings and time spent with Nelson Mandela. Brown leads the Third Baptist Church, is chief of the local chapter of the NAACP and a longtime supporter of gay marriage. Roberts reported this quote:

Physically, California [...] is not unlike South Africa, Brown says. Cape Town has hills like San Francisco, and Johannesburg is in a valley like Los Angeles.

But, “San Francisco is not that inclusive, fair and just society we claim it to be,” Brown said. “It’s greed that causes all this conflict in the world. And he [Mandela] wanted to share.”

His criticism about our city in general echoes what I feel about how control and use of the rainbow flag at Harvey Milk Plaza is exclusive and unjust as currently managed by the Merchants of Upper Market Castro, so I reached out to Brown. Yes, I believe Mandela would endorse sharing use of the rainbow flag at the plaza. Inspired by what Roberts reported in the Examiner, I reached out to Brown.

We had a phone chat about my petition to Mayor Ed Lee to have the rainbow flag on pubic land to fly at half-staff to show the LGBT community's deep and wide respect for the life and enormous good legacy of Mandela. Brown agrees that the flag should be lowered in coming days and promised to start making calls tonight about this effort.

He also gave me his blessing to report that he fully endorses flying the Harvey Milk Plaza rainbow at half-staff to honor Mandela. I'll be following up with Brown in the morning.

Please sign the petition and ask all of your friends and family to do the same. Thanks!
Posted by Unknown at 9:23 PM
Email ThisBlogThis!Share to TwitterShare to FacebookShare to Pinterest