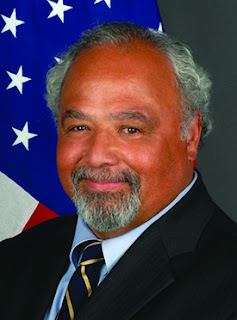 We all aren't dead yet. I'm talking about people with HIV and AIDS, especially us longterm survivors, none of whom were included in a recent San Francisco Chronicle puff piece on an HIV expert.

Reporter Erin Allday on December 25 profiled Dr. Eric Goosby, pictured, who recently resigned as the U.S. Global AIDS Coordinator and head of the President's Emergency Plan for AIDS Relief, and it can summed up thus: Goosby and his friends said. Period. End. Of. Story.

Not a single person living with AIDS was quoted by Allday, but she did include comments from Goosby's friends and colleagues Dr. Tony Fauci at NIAID, Dr. Paul Volberding and Dr. Stefano Bertozzi of UC Berkeley and Dr. Paul Volberding of UCSF. Of course, they all have kind words for their friend and the profile could have been written by Goosby in that there wasn't any criticism about him mentioned.

I'm not suggesting that Allday shouldn't have spoken with those doctor pals, but that in addition to their remarks it would have been great if she had located one or two folks living with HIV and quoted them, and also given some space to a critic of Goosby. Yeah, the man has critics after all his years in AIDS research, care and advocacy but you wouldn't know it from the SF Chronicle.

But as of November, he's made [the Bay Area] his permanent address again, taking a faculty position on UCSF's Global Health Sciences team. Goosby is starting a program focused on the scientific study of improving health care efficiency.

Also omitted was reference to what Goosby is being compensated in his new UCSF position. As a longterm accountability activist I'm always interested in learning what AIDS researcher and consultants are paid for their expertise.

This passage could have been a great jumping off point to how longterm people with AIDS feel about what we saw in the 1990s and the grief and trauma we have learned to deal with:

The move [in 1991 to work in the Clinton Administration in Washington], Goosby said, came at a time when he was feeling beat up by the San Francisco epidemic - physically and emotionally exhausted, and full of grief over the patients he'd lost. "The saturation that all of us were feeling in San Francisco, around the death and dying, was a form of post-traumatic stress, I think, although we didn't recognize it at the time," Goosby said. "The Ryan White opportunity afforded me a decompression of that acute, unresolved grief."

What do PWAs and other AIDS activists think of Goosby's tenure heading running PEPFAR, and what do we expect he'll do that might impact our lives? These questions came to mind reading this Chronicle passage:

Goosby's field of focus is known as implementation science, and it involves applying rigorous scientific methods to programs designed to provide health care to large groups of people. [...] Goosby and his colleagues will be developing techniques to study and apply those methods to existing programs, both abroad and in the United States.

Yes, I expect the San Francisco Chronicle, of all the mainstream dailies in the country, to get the opinions of folks in those "large groups of people" who will be contending with decisions made by Goosby.

Unfortunately, despite several emails to Allday soliciting her response to my concerns she has not replied to me. If she had, I would have included her response. People with AIDS in San Francisco should have been part of her Goosby profile.
Posted by Unknown at 12:32 PM
Email ThisBlogThis!Share to TwitterShare to FacebookShare to Pinterest