Socarides Slammed by Humm for his DOMA/Clinton Record 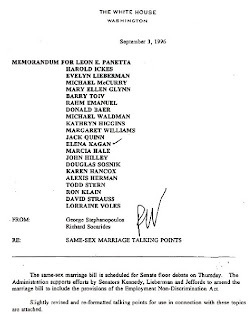 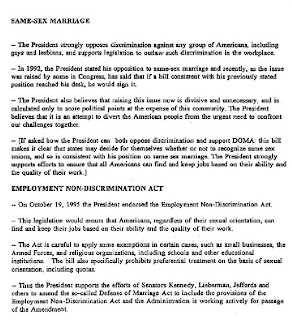 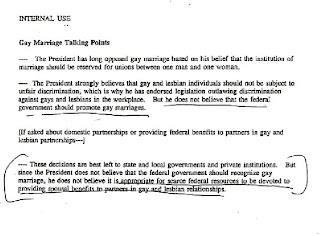 (The three-page Socarides penned talking points for the Clinton White House in 1996, after the president put his signature on DOMA. Memo obtained and shared by Duncan Osborne of Gay City News.)

Thank goodness we have my dear old friend Andy Humm to take Democratic Party homosexual Richard Socarides, Bill Clinton's special adviser on LGBT issues when he occupied the Oval Office, to task over his refusal to outright apologize for his role of minimizing the harms of DOMA and deflecting flack from gays when his boss signed the damn act into law.

Some of my previous blogging about Socarides' shameful silence when DOMA was enacted and efforts to hold him accountable is here, here and here.

Here is what Humm wrote at Socarides' blog at the New Yorker site on June 24:

Richard Socarides has never owned up to his role as one of the political architects of the Defense of Marriage Act as the gay liaison to President Bill Clinton who signed it. Any other gay operative with any self-respect would have resigned on the spot. Richard also fails to note the true history of the movement for same-sex marriage. It was not begun by gay leaders, but by individual gay and lesbian couples who wanted their right to marry.

The Human Rights Campaign was so dismissive of the issue that they did not even downgrade the 80% of members of Congress who voted for DOMA in 1996 when issuing their ratings at the end of the year.

Evan Wolfson, then of Lambda Legal Defense, did indeed get on board defending the Hawaii plaintiffs in the mid-1990s, bringing Lambda Legal Defense into the picture. But he was getting flak from even progressive groups such as NGLTF at the time who insisted we weren't for the marriage issue.

And this is what Humm posted at Socarides' New Yorker blog post on June 26:

Socarides calls Anthony Kennedy's application of his "careful consideration" standard "new," but it is the same one Kennedy used in his 1996 decision overturning Colorado's anti-gay Amendment 2 that forbade any gay rights laws in the state. As Socarides notes, it is not the "heightened scrutiny" standard LGBT people hoped for and need [...]

Finally, Socarides minimizes the harm President Bill Clinton, for whom he worked as gay liaison, did in violating his oath to uphold the constitution and sign DOMA in 1996. It wrote anti-gay discrimination into the law and gave permission to politicians across the country to pass even worse anti-gay marriage constitutional amendments. Clinton even told John Kerry in 2004 that his only hope for winning the presidential election was coming out against same-sex marriage.

The Clintons are on board on same-sex marriage now, but the damage they did to the cause by opposing our equal rights for more than 15 years is incalculable.

Thank you, Andy! May I live so long to hear the Clintons and Socarides once and for fully and clearly apologize for their b.s. regarding gay marriage and DOMA.
Posted by Unknown at 2:23 PM
Email ThisBlogThis!Share to TwitterShare to FacebookShare to Pinterest