An estimated fifteen veterans and allies of various ACT UP chapters gathered at San Francisco's LGBT Community Center late this afternoon for a two-hour plus reunion.

In New York, the ACT UP veterans back East were holding a simultaneous get-together and we tried to interact with them via Google Hangout, but when I spoke with Alan Klein on the phone about how ACT UP/NYC was not streaming to us, he said the person who was supposed to arrange their Hangout participation was running late.

Here in San Francisco we enjoyed a few minutes at Hangout with former ACT UP/NYC members Jamie Leo and Kit Winter who were at their own computers and both were in Los Angeles. Great to see them again and say hello.

Many thanks and big hugs to everyone in San Francisco for coming out today for some grub-n-gab, our buddies in LA and the gang in Manhattan for this collective in-person and online gathering of the tribe. We're here and we are damn fabulous! 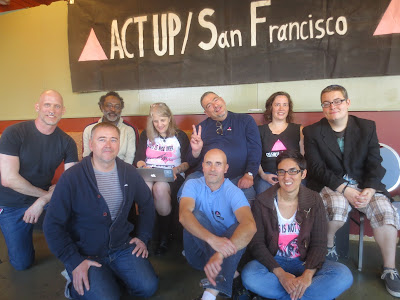 Derek, Dean and Liz chatting and posing for my camera.

Greg displaying one of his scrapbooks and explaining a flyer to Kendell. 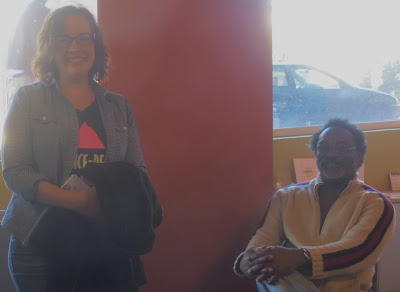 Kendell and Derek giving up their smiles for my photographic needs.

One of Dean's photos, on paper, from back in the day. Here's he's smiling with Maria Maggenti at his side sharing a grin. CORRECTION: Dean informs me that is not Maria but instead is his friend Nicole. I regret the error but it was nice anyway to think of Maria!!


Carmen and Brett were having an intense conversation about organization when I took this shot.

A photo scrapbook next to a flyers-and-news-clippings scrapbook passed and shared by Greg.

Posted by Unknown at 6:56 PM
Email ThisBlogThis!Share to TwitterShare to FacebookShare to Pinterest