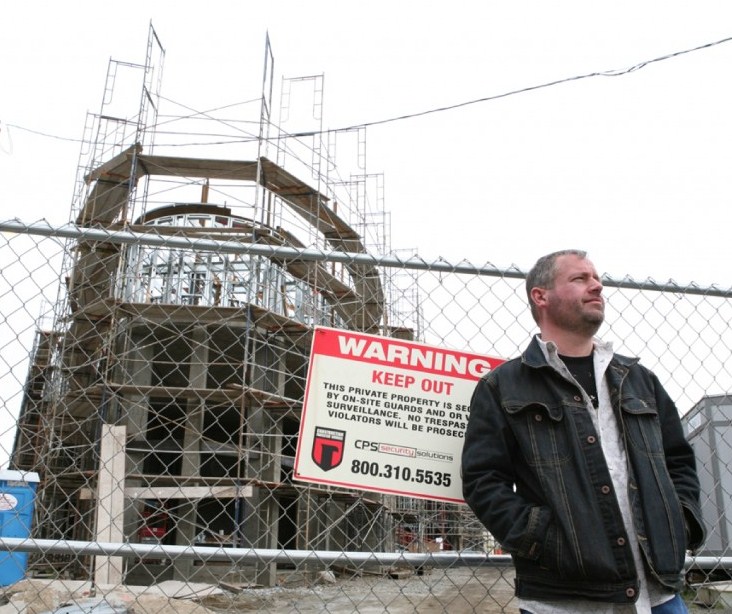 (Scott James standing in front of a construction site. It's not known if the building will be residences or offices and retail space. Credit: Kemble Scott, James writing alias.)

On Friday, June 7, the New York Times ran a hit-piece opinion column penned by local gay journalist and novelist Scott James, that demonized renters and attacked San Francisco's protections for tenants. Let's unpack some of his big lies in his "King of My Castle? Yeah, Right" column:

[W]e rented to a man who began as a good neighbor, but who soon became a nuisance — and who eventually became destructive and dangerous. It started one night when the tenant forgot his keys and rang our doorbell at 2 a.m. until we let him in. Then it happened again and again and again. One afternoon when he locked himself out, we weren’t home. But rather than contact a locksmith, he borrowed a ladder and a sledgehammer from a construction site next door, hopped the backyard fence and tried to smash his way into our building.

A few questions need to be asked. Since the basis to so much of James' argument is this tenant, why was his name omitted? Did it occur to James or the tenant to keep a set of keys under the welcome mat or some other location since he was frequently leaving his keys at home? Putting aside the almost screenplay-ready scenario of construction taking place next door, why did the contractors loan the tenant a ladder and sledgehammer? Weren't they suspicious the guy could have been lying to gain entry and rob the James home, or why he needed a sledgehammer to get into his apartment? Surely the contractors would know that a sledgehammer is not the best tool to slide open a window or locked door.

After he was discovered, midswing, he said that under San Francisco’s tenants’ rights laws, he was allowed to destroy our property, as long as he fixed it later. That might sound crazy, but it is a widely held belief among renters here that laws are so tilted in favor of tenants (and against landlords) that renters can get away with any outrageous behavior.

My partner and I are renters and practically all of our dozens of friends and acquaintances also rent, and we've never heard any of them express this alleged "widely held belief" that we can supposedly destroy property with impunity.

Where is the factual evidence backing up James' outrageous claim? Certainly sounds like he's out to demonize all San Francisco renters because of his horrible episode with one anonymous renter. The New York Times has a burden to produce the proof backing up James' claim that is a smear against renters. 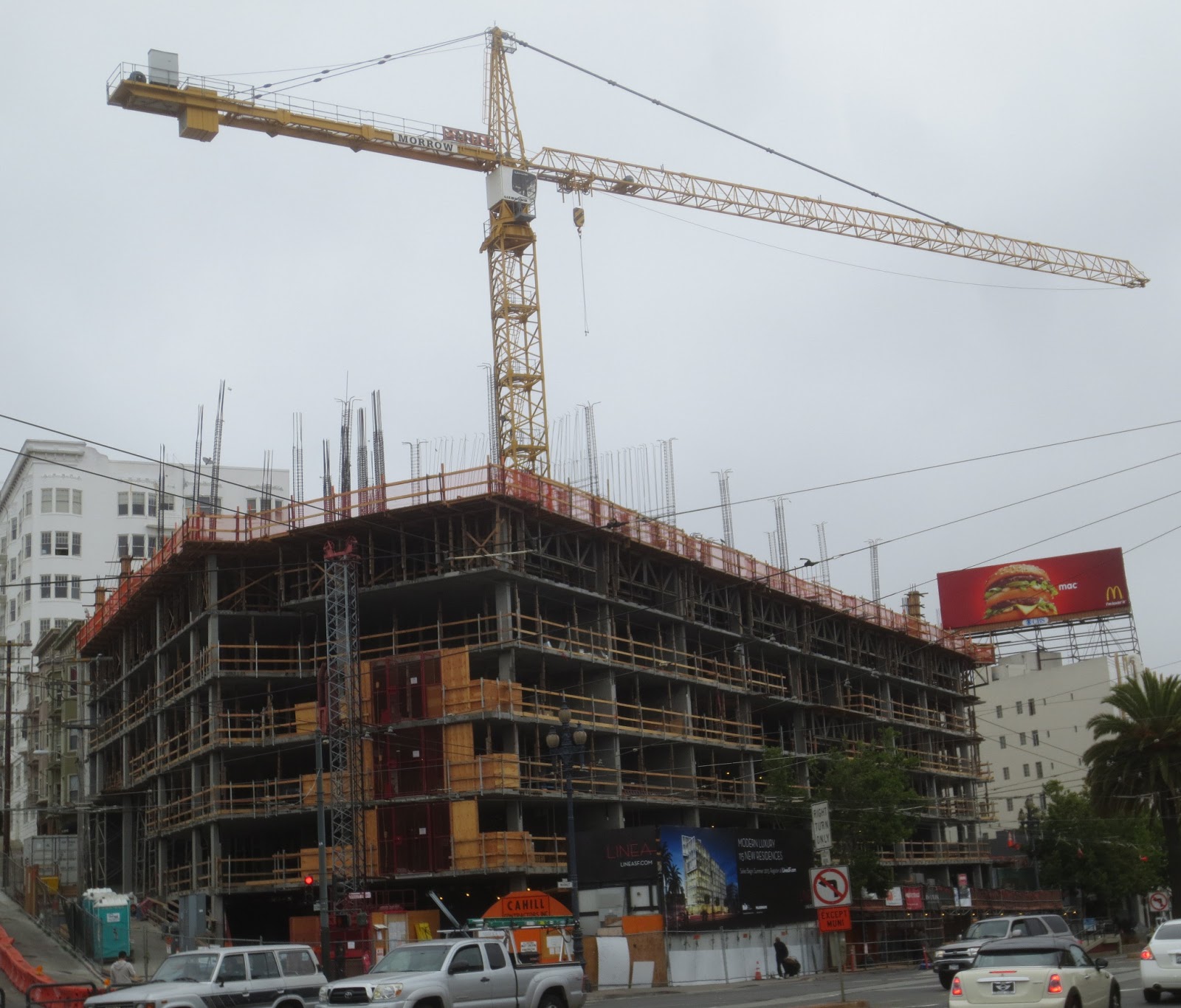 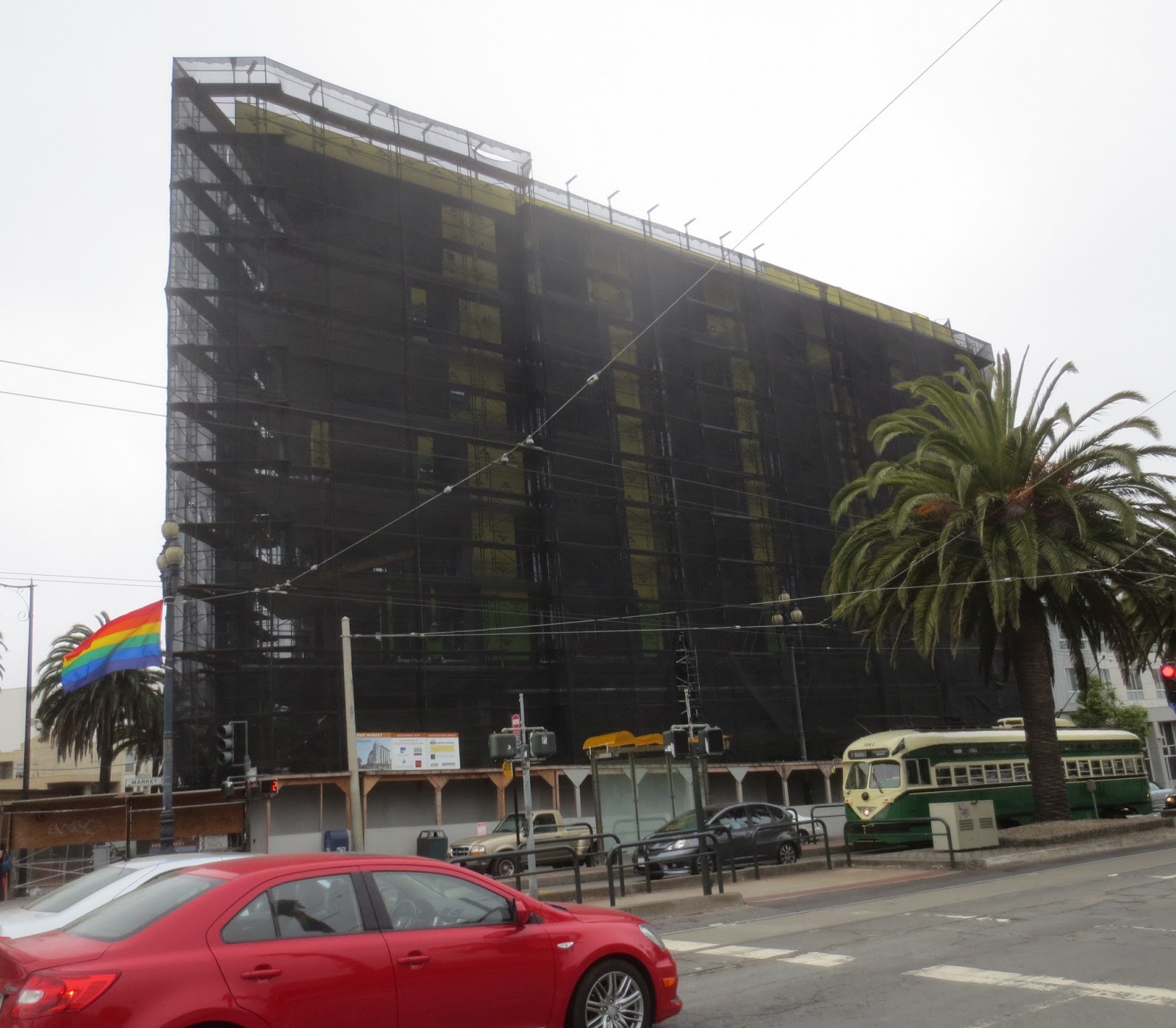 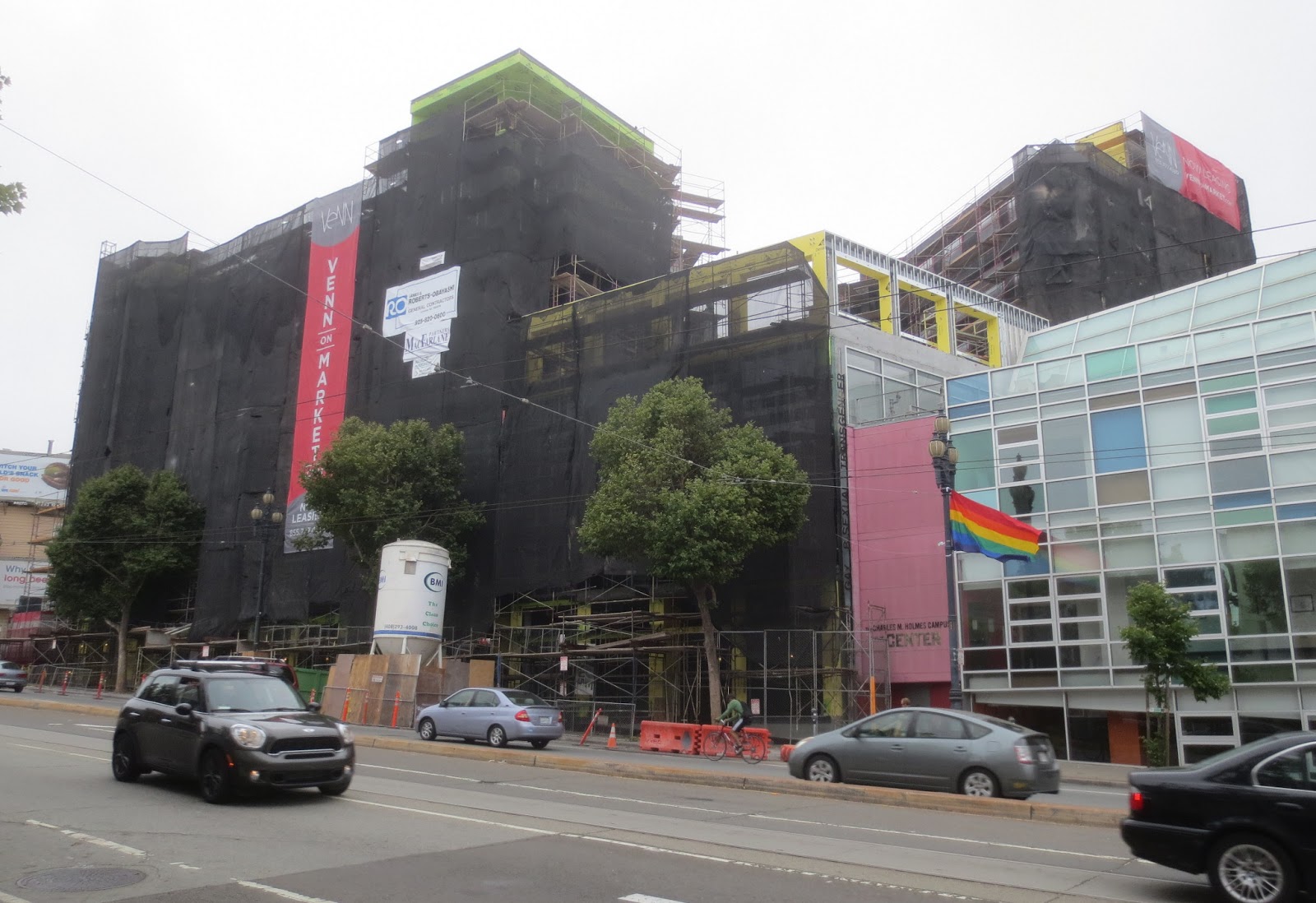 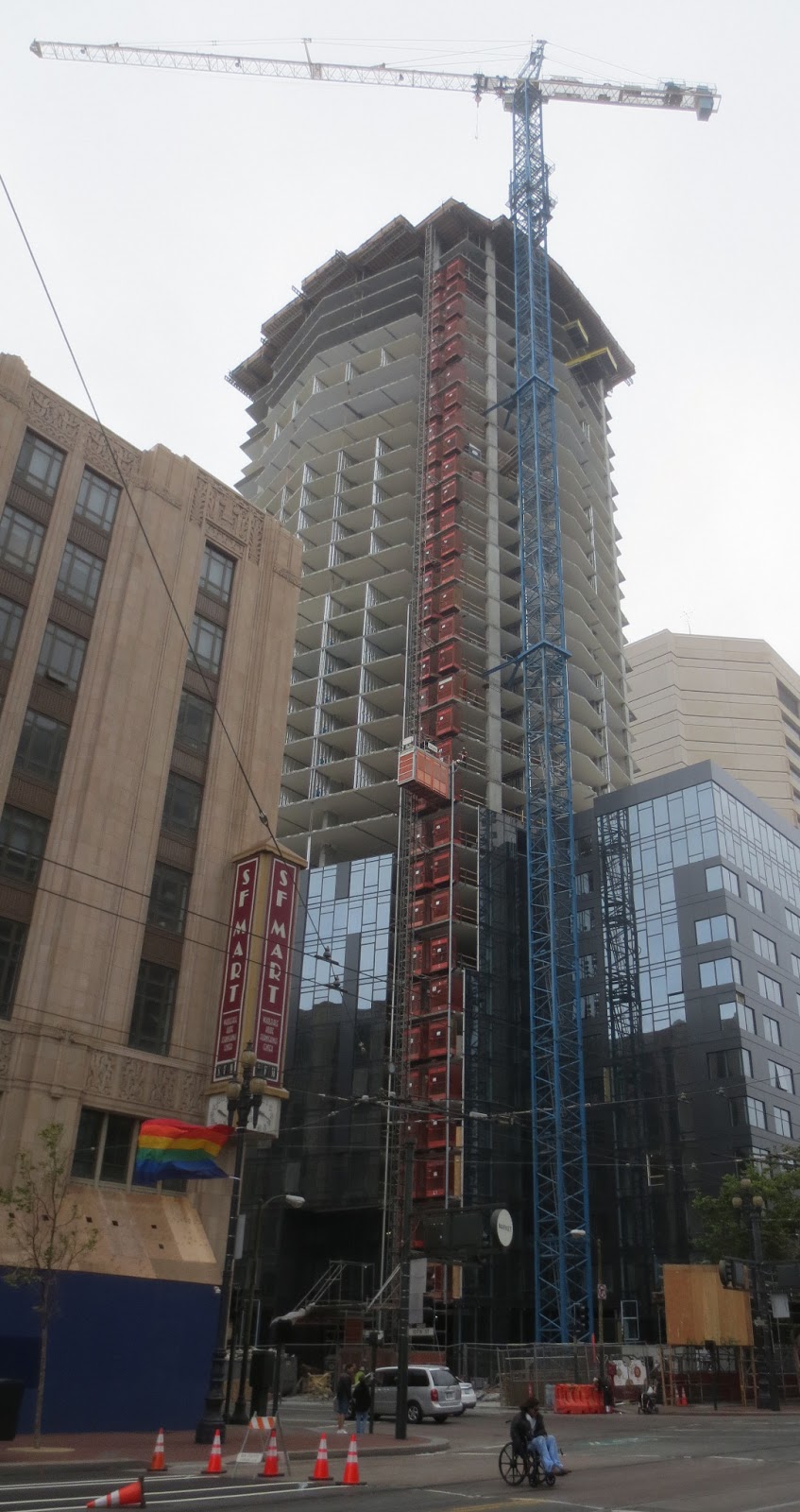 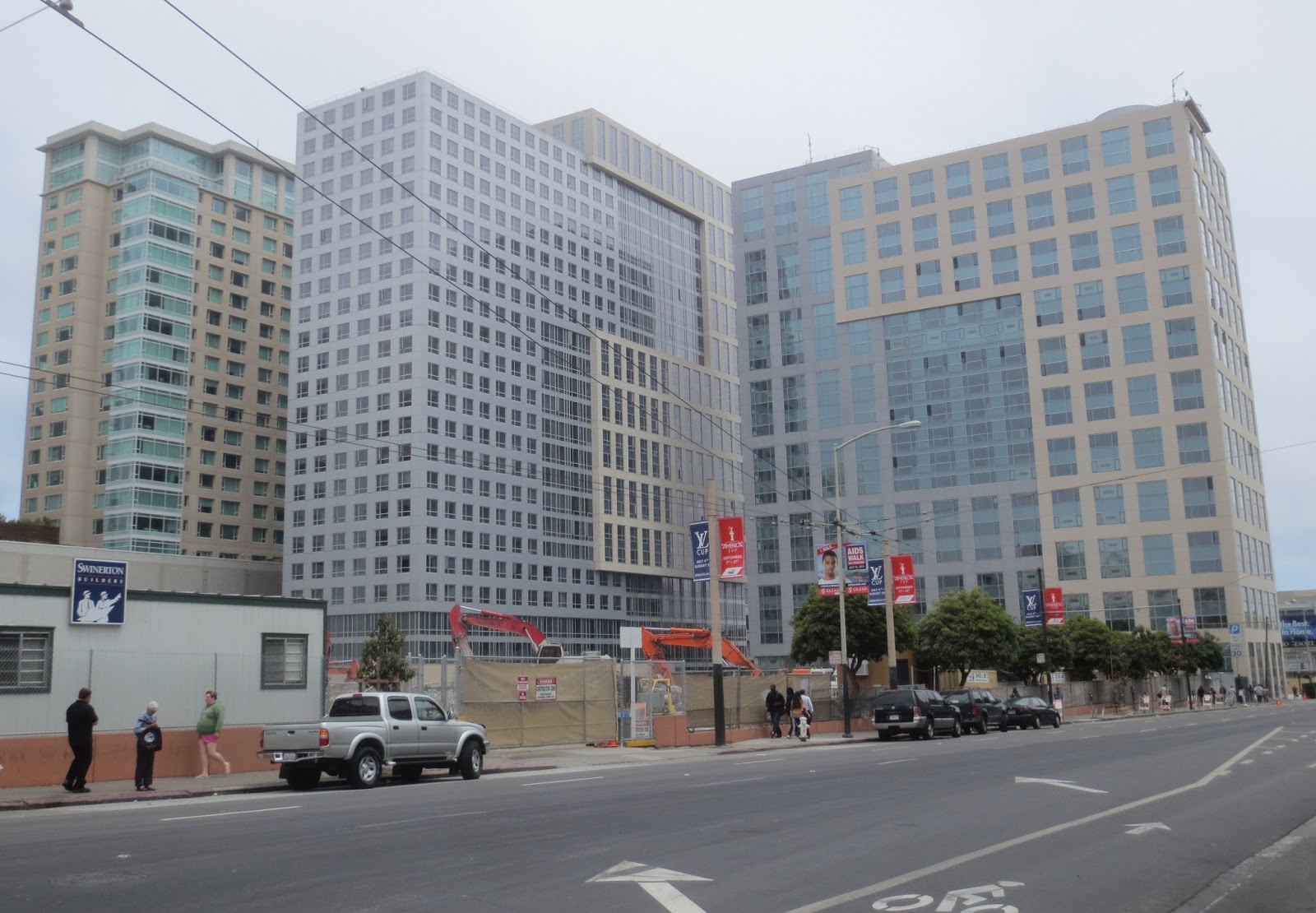 (Top photo shows residential construction underway at Market and Duboce, next is from Market and Guerrero, followed by Market and Laguna, then Market and 10th Street, and the last photo looking toward Mission and 8th Street shows from the left a residence opened two years ago, and two newer residents nearing completion, and on the lower left foreground is a trailer for the managers of the construction crew that started building a new high-rise condo building at Market Street. All images captured on June 9, 2013.)

And constructing new residences is difficult because we’re nearly surrounded by water and few locals wish to alter the city’s low-rise charm by building skyward.

Yes, James is right about those few locals but they are not any impediment to the booming construction happening all over town, including in the Castro where he and his partner own a home. As the photos show, San Francisco is witnessing a surge of luxury condos seriously altering our (almost lost) low-rise charm.


(Map of evictions from the April 30, 2013, edition of the Bay Guardian that accompanied a detailed story about low and moderate income renters losing their housing because of the eviction epidemic.)

In addition, a complex legal structure has been created to make evictions for just cause extraordinarily difficult.

James is not providing the full story about evictions, and he conveniently omits mention of the eviction epidemic going on that has been well-documented by the San Francisco Bay Guardian and tenants' rights groups. 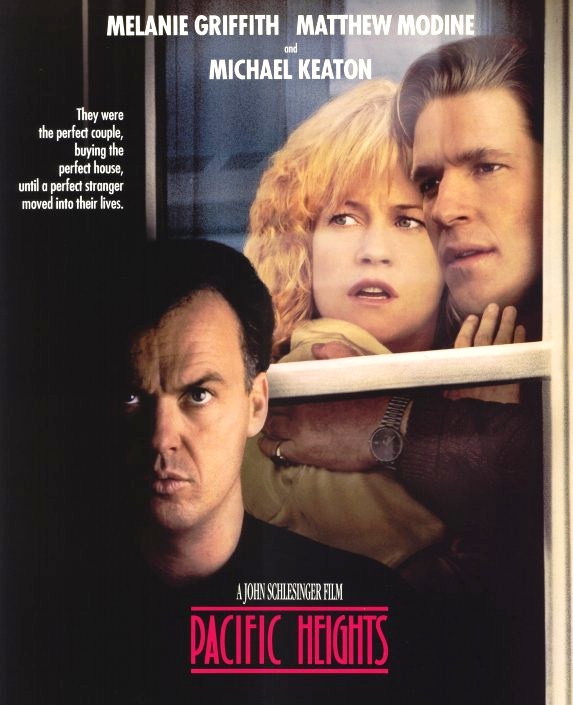 One day, after the sledgehammer incident, the tenant flooded his apartment and submerged a plugged-in appliance into an overflowing sink, shorting out the electrical system. We were lucky a fire didn’t start and burn down the block.

James' nightmare is beginning to sound like the modern day horror movie "Pacific Heights". He sure knows how to strike alarm at every turn, and here instead of saying luck was on their side and their house was not lost to flames, he's go to an extreme and conjures fear about an entire city block succumbing to a fire.

After countless sleepless nights, and worried for our safety, we hired a lawyer who specialized in tenant law. With more than a dozen serious incidents documented, we began eviction proceedings. Three days later, the tenant left on his own. (Destroying property, it turns out, is not actually a tenant’s right — even here.)

Why did they wait for so many serious incidents to occur before attempting legal relief? How convenient the tenant simply moved out - and gave no reason why, or, if he did, James omits that detail.

It took James tons of tenant trouble and securing the services of an attorney to debunk the myth of a tenant's alleged right to damage rental property? He could have simply Googled San Francisco's rental laws and put the myth in the dustbin.

A few days later, I happened to receive a call from the city about our property-tax appraisal. Among the questions: was anyone renting our downstairs? Not right now, I said. Well, the clerk explained, because of the city’s troublesome rental laws, a tenant-free property is much more valuable.

Another anonymous source and one who makes a phone call, instead of sending email or snail, out of the blue. Is it standard procedure for city employees to phone home owners about appraisals and offer such information about properties and tenants? Why would they ask if they were rental out their downstairs unit? This doesn't pass the smell test.

Renters in San Francisco have plenty worry about with all the gentrification going on and the last thing we need is for the New York Times running such a column, one that raises many questions the paper should address.
Posted by Unknown at 2:28 PM
Email ThisBlogThis!Share to TwitterShare to FacebookShare to Pinterest

Thanks, Michael, from a NY tenant activist. The Times continues its agenda of insulting its tenant readers and pushing for an end to tenant protections.

And Scott James, from his few columns at the Bay Citizen, struck me as the fag version of C.W. Nevius. In fact, I'm shocked he hasn't been hired by the Chronicle yet. He's a reactionary natural.

You make a very legit point, Michael. Maybe after reading James' column the Chronicle will find a way to use his work in the future. Ugh.

Whether the property would be more valuable or not with or without a tenant is irrelevant. Prop. 13 limits the amount the assessed value can change and that small amount is almost universally vastly less than any real change in value. Moreover, as the amount is cumulative (that is, even if the value of a property were to fall in any one year, the value is likely so far below the actual market value, that the allowed increase can happen regardless of the market price), the value of a piece of property is nearly always increased without regard to market conditions. Given the time lines involved, the assessed value is likely well below the market value.

Moreover, assessments are not done over the phone and do not include value due to occupancy. Thus, a 40-story building filled with tenants has the same assessed value as the same building completely empty.

The article in the NY Times is clearly bogus and would only fool New Yorkers unaware of the importance and function of Prop. 13.