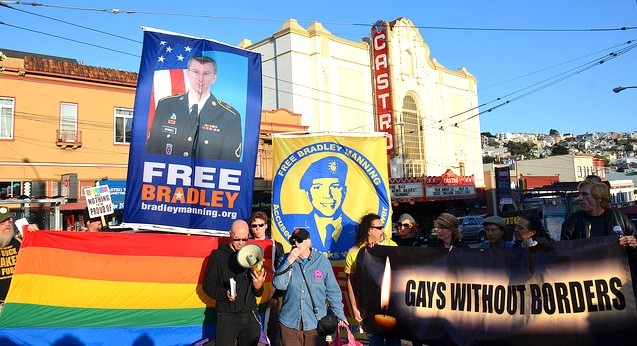 (On May 17, IDAHO, International Day Against Homophobia, San Francisco queer grassrooters declared Manning a grand marshal of Pride at Harvey Milk Plaza in the Castro district.)

Some in the Bradley Manning ad hoc coalition Grand Marshal, Not Court Martial (GMNCM) have expressed displeasure that nutty singer Michelle Shocked wants to join the folks marching for Manning at SF Pride on June 30. I dissent from their views because I believe come Pride Sunday, the Supreme Court will have rendered its decision on gay marriage and that will be the dominant issue of the Pride Parade and Celebration.

Let me also state for the record that I in no way endorse the loony positions of Shocked, but instead very much see her as a tool to build more awareness about Manning, his plight and court martial, and a bigger Manning contingent.

In other words, the Manning contingent will be competing for community, blogger/social media, traditional news attention with the Supreme Court's ruling and if it goes positively for the gays, there will be tremendous elation at Pride. And if the justices determine that there's no standing or makes no ruling, anger will infuse the Pride events.

Either way, the Manning contingent could use every damn body it can muster and if any participant is likely to bring some old and new media attention to the contingent and do the most important thing - spell Bradley Manning correctly - then don't dissuade that person no matter how vile her views may be on other issues from joining the contingent on June 30 at 10 am at Howard and Beale Streets. That is where the contingent will gather.

Extending an invitation (talk about radical), to Shocked from GMNCM would generate attention and in turn spread the word about where and when the GMNCM coalition. The coalition should clarify if it has a litmus test before marchers can join them, or if everyone is welcome to march for Manning.
Posted by Unknown at 11:10 PM
Email ThisBlogThis!Share to TwitterShare to FacebookShare to Pinterest

I'd temper any enthusiasm you may have for the extra attention she might draw to Bradley Manning's case.

If you've been following Shocked's daily twitter show, you'd know that she latched on to the Manning/Pride drama after she got wind of Thrashers's gawker article. She sees it as validation for her paranoid conspiracy theory.

Shocked believes there is a 'prohomo' 'gaystapo- led' 'lynch mob' that has been out to silence HER and that they had agents planted in the Yoshis audience waiting to take Michelle Shocked down.


There's a bit more to it- including google and you tube's collusion w. the progays to keep the damning bootlegged yoshi's vids up and available for the world to see.


At any rate, there's more to her 'support for Manning' than you may know and encouraging her to march with you,or worse, hoping to exploit her somehow for the cause is a really bad idea.