ABC: Anyone But Christine: Queers Against Quinn at NY Pride 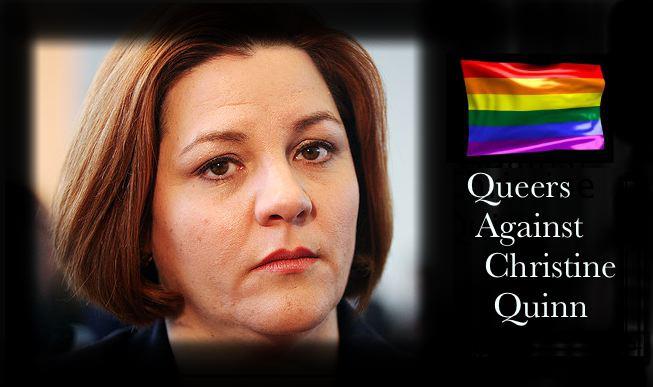 It's vitally important that LGBT people not waste their votes on Democratic Party hacks who happen to be gay, without first demanding genuine leadership and accomplishments that benefit the community, as they climb up the political ladder.

If you're in the New York and New Jersey area on Sunday, please join this contingent at New York City's Parade.

The Queers Against Christine Quinn has created political space that allows for much-needed criticism of her and her policies that will in essence be another term for Mayor Michael Bloomberg, if she is elected mayor of New York. The group has staged protests outside her fundraisers, picketed the New York Times for their soft-glove coverage of Quinn's tenure as City Council Speaker and maintains a web site about her and their efforts to hold her accountable.

As if that weren't enough, a leading Quinn critic, Louis Flores, has written a book called "The Roots of Betrayal: The Ethics of Christine Quinn" to inform voters and potential donors about her self-serving political career. You can read the first chapter here for free.

Here's the info about how to join the contingent and go here to read their Facebook page:

Join Queers Against Christine Quinn as we march in this year's Heritage of Pride Parade in Manhattan.

March with us to make a bold political statement about why people should vote for Anybody But Christine Quinn!
Posted by Unknown at 11:31 PM
Email ThisBlogThis!Share to TwitterShare to FacebookShare to Pinterest