I Have Major Nice Things to Say About SF Pride

(Members of the board.)

Last night was the monthly board meeting of SF Pride, which is open to the public, and I attended it as did Joey Cain. Both of us are part of the ad hoc coalition to hold the board accountable for its decision to rescind a grand marshal honor to WikiLeaks hero Bradley Manning.

During general public comment, I effusively praised the board for last week (quietly) posting their three latest IRS 990s on their About page. In May, I nudged SF Pride to get with the transparency agenda and they apparently agreed to do that, which is why I complimented the board. 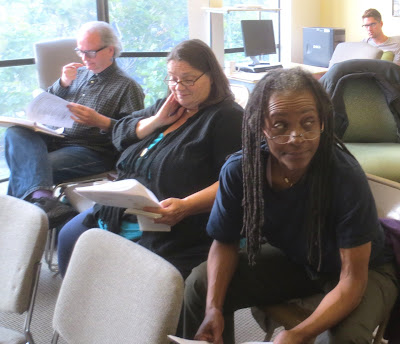 (Members of the general public.)

The board members seemed amused when I suggested they issue a release heralding the posting of the IRS 990, in the context of how they listened to constructive criticism from this community member with a transparency suggestion and acted on it. Why shouldn't they toot their own horn about this transparency development?

It was also good to see SF Pride had plenty of paper copies of their May financial report and minutes from the May 7 board meeting available, and the board members appeared receptive to my suggestion that they build upon their IRS 990 transparency and post their paper reports and minutes on their site.

(Members of the staff. Joe is in the middle, wearing a white shirt.)

During the reports from SF Pride staffers, we were told by the man, Joe whose last name I didn't catch, in charge of security for Pride weekend that they've been in touch with the police department regarding safety matters in the aftermath of the Boston bombing.

Joe said that they were meeting today with police officials at the Northern Station to discuss new security measures to keep everyone safe from harm during Pride weekend. There will be additional meetings about these measures as the month progresses.

Many thanks to the SF Pride board for posting their three most current IRS 990s and for keeping their commitment of holding open meetings. Let's hope the posting of the tax returns is an indication that when their 2012 tax report is filed in early August that SF Pride posts it on their site within days of filing with the IRS.
Posted by Unknown at 12:45 PM
Email ThisBlogThis!Share to TwitterShare to FacebookShare to Pinterest