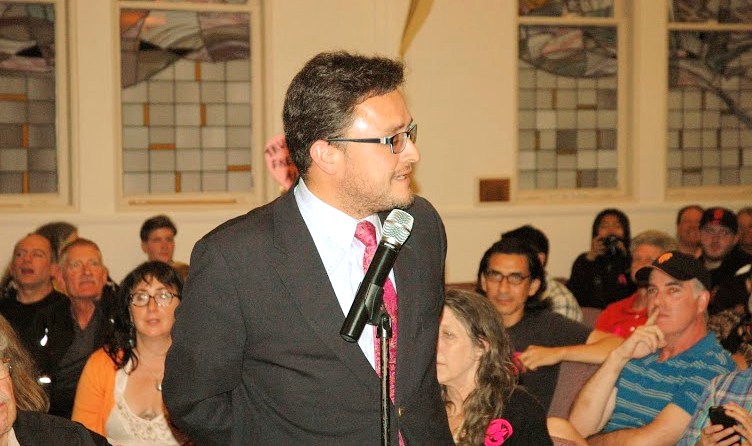 (Supervisor Campos preaching to the choir, so to speak, on May 31 at MCC. Credit: Clinton Fein.)

The SF Pride board of directors held a raucous three-hour forum on Friday, May 31, at the Metropolitan Community Church in Castro and heard just over fifty people speak against their heavy-handed rescinding of a grand marshal slot to WikiLeaks hero and gay man Bradley Manning. By the way, there were three community members who used mike time to praise the board for that rescission.

Over at the Castro Biscuit site, independent journalist Liz Highleyman provides the community with an excellent report back on the meeting along with photos.

One of the attendees was Supervisor David Campos, who represents District 9 and the Mission, who said that as an individual and not as an elected official (I'm not sure why he made such a distinction), that he supported Manning and asked the board to create a method of honoring the whistle-blower for the June 30 Pride Parade.


(The John L. Taylor Committee Hearing Room at City Hall, where Campos needs to schedule an official meeting about SF Pride, with him sitting in the center chair wielding his gavel, before June 30.)

Let's go over a number of reasons why Supervisor Campos, who has his hands on the levers of much power via his vote on the City's budget and other means, need to hold a hearing as an elected official and not be given a free ride because he comes to the gay left segment of the community at MCC and literally preaches to a choir of Milk Club members/queer and allied progressives and his friends.

Sure, nice of him to make an appearance at SF Pride forum but he needs to also deliver answers at City Hall. Why Campos must organize a hearing:

1) Since 2010, SF Pride has received $169,000 in City money from the Grants for the Arts program, whose budget is set by Campos and his colleague, and those are one-hundred-sixty-nine-hundred-thousand reasons to hold a City Hall hearing.

2) The Human Rights Commission has rejected a complaint lodged by attorney David Waggoner and numerous LGBT luminaries requesting an investigation into how SF Pride allegedly violated municipal anti-discrimination laws, while the director of the commission, Theresa Sparks, has recused herself from any substantive role regarding the complaint because as a member of SF Pride's Electoral College she voted in choosing grand marshals for this year.

Are LGBT taxpayers satisfied with HRC rejecting calls for an investigation?

3) During SF Pride's financial meltdown in 2011, Campos had this to say to Joe Eskenazi over at the SF Weekly for its cover story about the latest troubles at the organization: "Pride is an organization that is no longer viable. We have tried to be helpful. We've given them the benefit of the doubt. But you do reach a point where you have to fish or cut bait."

Powerful and critical words that didn't lead to a City Hall hearing, among other things like a long-range plan to right the management and fiscal problems at SF Pride, and here we are two years later with yet another loud and vexing SF Pride crisis roiling the community.

Maybe if Campos had played hardball in 2011 with SF Pride and given us a hearing at the Board of Supervisors, we might have avoided this current crisis and its divisiveness. He can make up for that failure with a hearing before June 30.

4) The May 31 MCC forum attracted around 100 persons over its three-hour running time, and a smattering of press, blogger, photo streams and Twitter attention. The Bay Area Reporter blog ran a story, NBC11 aired a story that omitted Campos and KPFA mistakenly called him John Avalos.

All well and good, that varied attention, but the entire affair should have been live streamed by SF Pride, so that anyone could listen in and through archiving watch it at a later date. Campos holding a City Hall hearing and airing and streaming it via SFGovTV's platforms, live as it happens and archived at the City's site, would deliver the transparency we need about these matters.

5) Let's have an update from all the City agencies - police, public works, health department, traffic and parking, etc - involved with making SF Pride happen, regarding their permitting processes and creating a safety plan that uses fewer metal barricades so folks on the sidewalks can join a contingent as it passes by.

6) Last item on the City Hall hearing agenda is the economic impact on the City's coffers, sponsoring corporations and the hundreds of local businesses that benefit from SF Pride.

Since Campos is a go-along-to-get-along gay Democrat, he'll need copious amounts of pushing to get him to deliver from his place of employment, the seat of local government, a much-needed hearing. Let him know you support a hearing on SF Pride at City Hall prior to June 30. Call him at: 415-554-5144, or send email to: David.Campos@sfgov.org.
Posted by Unknown at 11:25 PM
Email ThisBlogThis!Share to TwitterShare to FacebookShare to Pinterest

Just wanted to make a comment about this: That site you linked to (CB) where the article appears from independent journalist Liz Highleyman. When those guys first started that site I used to read that and liked it, but have since become turned off by them. They seemed to have done a 180 and now feel the need to gush over the merchants' group as well as the benefit district group and a certain supervisor. I’m not the only person to notice this change in them. Maybe they're hoping to get some funding somehow through certain people so they thought it might be wise to change course? Thanks for the info.