Back on May 7, local civil rights attorney David Waggoner and a host of activists submitted a written complaint to the San Francisco Human Rights Commission over the SF Pride board's vote rescinding a grand marshal slot to queer WikiLeaks whistleblower Bradley Manning. That five-page complaint is here.

The gist of the complaint, as I understand it, is that since SF Pride is subject to City anti-discrimination codes because it receives $58,000 annually in City funds for general operating expenses, the nonprofit board's rescission vote trampled on Manning's First Amendment rights and that the HRC should investigate. 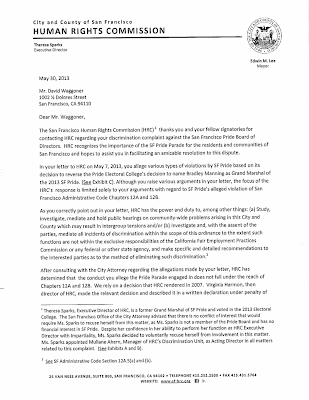 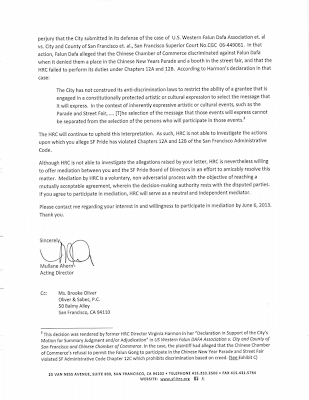 A few days ago, David was informed that the HRC was rejecting his claims of discrimination because the conduct of the Pride board does not fall under the reach of City anti-discrimination codes. David has graciously shared the two-page letter from the commission with me which is posted above.

The HRC has offered him and the Pride board mediation services and the parties have until June 6 to accept that offer. 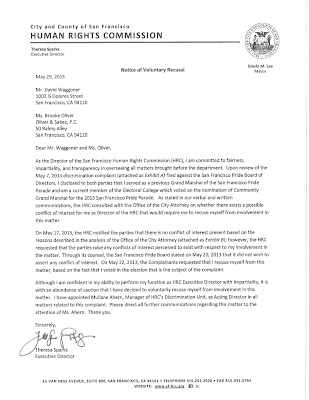 Theresa Sparks, the executive director of the HRC who is also a member of the Pride Electoral College and as such voted in picking this year's grand marshals, has recused herself from the matter before her commission even though she believes she would be able to perform her official duties with impartiality.

We'll find out in the coming days how David and his cohorts will respond to these developments at the HRC.

CORRECTION: David has informed me that his complaint is not about the trampling of Manning's First Amendment rights. Why I thought it was stemmed from this key paragraph in his complaint, in which David writes about free speech issues pertaining to SF Pride and not Manning. I regret the error. From the complaint:

Williams’ statement also forbids any member of Pride’s leadership from supporting, or even hinting at supporting Manning. Such a boldfaced declaration presuming to ban First Amendment protected speech is itself chilling. Turning the First Amendment on its head, Williams then claims that those who feel differently may "show up, participate and voice their opinions at Pride this year" because Manning will no longer be grand marshal. Thus, the Board is violating the First Amendment in order to protect it.

Posted by Unknown at 3:32 PM
Email ThisBlogThis!Share to TwitterShare to FacebookShare to Pinterest

The man is a criminal, he broke the law and deserves to pay for it. However considering how badly he was treated in jail, all charges should be dropped. He is not a hero, his actions could have caused serious harm to some people but DIDN'T.