Frameline 37: Films Bring Us Together 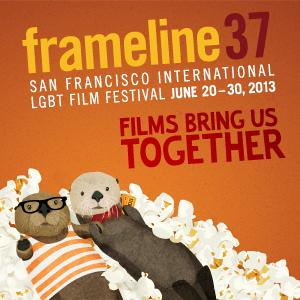 Queer cinema rules over the Castro, Roxie and Victoria theaters in San Francisco and the Elmwood in Berkeley from now until June 30.

The 37th annual Frameline film festival opened last night with a gala screening of "Concussion" at the Castro, and the reviews for the movie and hoopla on Twitter are all thumbs up and positive. What better way to launch Frameline this year, than with gay movie-lovers happy to be inside dark theaters and ignoring the beautiful weather?

I catch my first film of the festival today with "Pit Stop", screening at 4 pm at the Castro. It's described as a narrative feature looking at small town blue collar men and their lives. Director Yen Tan is expected to be there. Always a treat to have the filmmakers in attendance for Q & As.

High on my list of must-sees are the documentaries "Gore Vidal: The United States of Amnesia", the AIDS themed "Battle of AmFAR" featuring Liz Taylor and Mathilde Krim, "Continental" about the famous Upper West Side bathhouse with the fabulous Michael Musto offering gossipy dish, and also "I Am Divine" all about John Waters' muse and underground icon Divine.

Among the features I hope to see are the Polish movie "In the Name Of", about a Catholic priest coming to terms with his homosexuality, and Travis Matthews and James Franco's "Interior. Leather Bar" that recreates the lost footage of "Cruising".

See you at the queer movies!
Posted by Unknown at 10:42 AM
Email ThisBlogThis!Share to TwitterShare to FacebookShare to Pinterest

Speaking of the Castro Theatre, I haven't been back to that theatre since this happened: