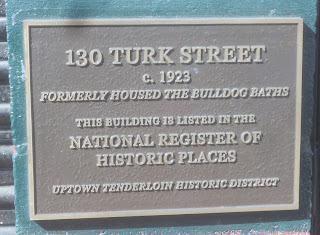 (The location of the old gay Bulldog Baths is listed on the National Register of Historic Places, according to this plaque at 130 Turk Street.)

Once upon a time, there was bathhouse equality in San Francisco and there were venues for gay and straight clienteles. But at the height of AIDS hysteria in the 1980s, this City closed gay bathhouses because of the stereotype that homosexual males couldn't be trusted behind doors on cubicles in commercial spaces. What was allowed then and continues today are sex clubs with no privacy for patrons and active, continual policing by the clubs' staffers.

Over at the SF Examiner today their ace reporter Chris Roberts, who is quite skillful at obtaining public records no one else is aware of and making them news, clues us in to developments related to straights and bathhouses in 2013:

Massage parlors shut down for illegal activity including prostitution are now back in business in the Tenderloin, and they are trying to obtain permits from police to operate as bathhouses.

Villa Aroma at 801 Geary St. and Total Comfort Spa at 450-B Jones St. have applied for city permits as bathhouses, according to police records [...]

Eight bathhouse permits are currently being processed by the Police Department. It's not clear if the other proposed bathhouses also were former sites of massage parlors. A spokesman for the health department said Thursday that such records would not be available until Tuesday [...] Villa Aroma and Total Comfort could receive permits as soon as next month.

Sex work and money issues aside, I oppose leaving the police department as the sole City agency that decides whether bathhouse permits should be issued. Instead, I'd prefer for either the Department of Public Health to have that power or another City department or a combination of thereof.

I've emailed the SFPD's permits division, requesting info as to whether any of the eight pending permits are for a gay establishment. I'll update when I hear back from the department.

Sure would be great if, as many expect, there will soon be a Supreme Court decision allowing for gay marriages to resume in San Francisco (and elsewhere), or, as the politically correct deem gay marriage, there will be marriage equality, I'd like to see bathhouse equality restored in this City.


Posted by Unknown at 4:17 PM
Email ThisBlogThis!Share to TwitterShare to FacebookShare to Pinterest