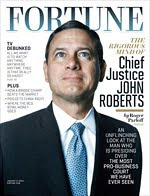 As I was passing the magazine section at Safeway on my way to the pharmacy to pick up some prescriptions, my gaydar starting zinging as my eyes saw the man gracing the cover of the latest issue of Fortune. It was Supreme Court chief justice John Roberts. I've heard talk that he might be a member of the choir, but lack proof that he's gay.

I read the Fortune profile of Roberts and my expectations that a gay case would figure in it were met. The article touches on gay marriage and gay adoption challenges in the lower courts, and how the SCOTUS might rule on such matters:


Roberts is also likely to vote like a conservative if the Court eventually hears the constitutional showdown that [SCOTUS watcher Tom] Goldstein considers "possibly the case of the century": the challenge to the constitutionality of California's Proposition 8, the 2008 ballot initiative forbidding gay marriage.

Numerous gay-rights cases are now working their way through the lower courts, challenging, for instance, the federal Defense of Marriage Act (which says that if gay marriage is allowed in one state, other states and the federal government need not recognize those marriages) and state laws restricting gay adoption. The Prop 8 case will be the toughest case for the gay-rights side to win,  Goldstein explains, because it asks the Court to do the most: Strike down a definition of marriage that has prevailed for most of the country's history and that is still used in all but a handful of states. ...

What surprised me though was learning that Roberts, like millions of American families, has a lesbian relative, something I am not aware of being reported until Fortune magazine spoke with his cousin:


At Roberts' confirmation hearings, one of the members of his family that he introduced to the Senators was a cousin named Jean Podrasky.

"I don't know John that well," says Podrasky, 46, in an interview with Fortune, "but he's always been very kind to our family." Roberts gave her a personal tour of the White House as a high school graduation present, she remembers.

Podrasky is gay, as Roberts knows, she says. She lives in San Francisco with her longtime girlfriend. Would she like to be able to get married someday?

Has she ever discussed --

"I really would never disrespect him by asking him about his cases," Podrasky says, interrupting. ...

If it had been reported before that the chief justice of the Supreme Court has a lesbian cousin, I'm almost sure I would have filed that factoid. Googling for any gay or lesbian references to Podrasky didn't turn up much, but she worked in the 1990s at the Servicemembers Legal Defense Network. BTW, the transcript of the hearing at which Roberts introduced his cousin shows he made no mention of her being a lesbian.

While I can understand Podrasky not chatting up her influential cousin about cases that might soon come before the Supreme Court, I would still hope that she would talk to him about the real-world impact of his decisions and the affects they have on gay people.

Kudos to Fortune for breaking the news about Roberts' lesbian cousin.
Posted by Unknown at 3:43 PM
Email ThisBlogThis!Share to TwitterShare to FacebookShare to Pinterest

...I would still hope that she would talk to him about the real-world impact of his decisions and the affects they have on gay people.

That would be very, very wrong. The role of a Supreme Court Justice is to weigh the evidence presented and interpret it in the context of the U.S. Constitution, not make a ruling that impacts favorably towards friends, relatives, or other personal interests. It might even be argued that because of Roberts' relationship to his cousin he has a "horse in the race" and should recuse himself.

To put it another way, how would you feel if he instead were to, as a Catholic, confer with his Bishop or Cardinal on the impact to the Church before issuing an opinion?

We need to win -- we deserve to win. But we must do it fairly or it means nothing.

"The role of a Supreme Court Justice is to weigh the evidence presented and interpret it in the context of the U.S. Constitution" is a remarkably limited understanding of what a justice does. I cannot thnk of a single justice, liberal, conservative or moderate who has followed such a limited guide. All justices consider the impacts of their decisions. Some more than others but none just call balls and strikes and have no concern for the game.

I would not call that expectation limited at all. It is what the courts are there for, to rise above the mud-slinging and reactionary rhetoric. And yes, the identity politics.

True, Justices are both fellow human beings with our inherent flaws and also pragmatists. Surely they do not arrive at a decision without -- consciously or unconsciously -- considering the impact of that decision. But it is a far cry from saying "If this law is upheld/struck down, the following will likely occur" to "well, my cousin/friend/business partner will benefit directly if this is so."

As I had alluded to earlier it is even the hint or possibility of a conflict of interest that is of concern. Consider Justice Walker and the Perry case. Most rational human beings would read his very erudite decision and conclude that Prop 8 was indeed a travesty of justice, predicated upon the most base and vile of human prejudices and sold to the masses in a veil of fear and self-righteousness. The other side put on no case because they had no case. Yet all they need do is yell, "The judge is one of them!" to instill doubt about the validity of that decision.

I'm not suggesting that Roberts recuse himself, I'm just cautioning -- strongly -- against Mr. Petrelis suggestion that Ms. Podrasky try to unduly influence her cousin. Can you imagine if the Roberts court upholds Walker's decision (either broadly or narrowly) and a possibility of her influence is even whispered?

Maggie Gallagher's tiny little brain would explode all over her mumu... Would you want to clean that up?

Brad Karrfalt, what makes you think that Roberts does not make rulings that reflect his upbringing and values? He may not "confer with his Bishop or Cardinal," but I assure you that Roberts' background as a heterosexual, Catholic, white male influence the way he views gay marriage, abortion, affirmative action, free speech, and corporate power.

For those who think that it would acceptable for Roberts to consider his cousin's interests in a ruling on Perry, surely you must agree there is no problem with Scalia and Thomas meeting with the Kotch brothers possibly regarding Citizens United -- right?