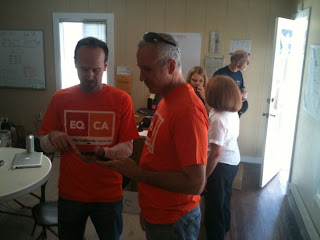 (EQCA's incoming chief, Jim Carrol, left, and outgoing boss Geoff Kors, right.)
Absolutely not a goddamn thing has changed at Equality California since the joined-at-the-hip dynamic duo of A-gays Geoff Kors and Jim Carroll, his never-held-a-public-forum righthand man for the past few years. Behind closed doors, these two have run the EQCA show, which has been not much more than the duo allowing Democratic Party leaders to co-opt the group.

Come February, two years will have passed since EQCA's leader last appeared at an SF public forum, while Kors and his crew have done everything in their power to thwart any genuine grassroots voices be heard at the top level and influence direction. Same as they did before we lost Prop 8.

Kors recently announced his resignation, finally, and a press release assured the community that there would be a very smooth transition in the four months before actually stepping down. This would allow for an alleged extensive search by the board to find a replacement.

At the time of the release, I blogged on how only a miracle would produce a democratic engagement by EQCA's executives and board, with a series of open meetings. Of course, this leopard is not about to change its organizational spots any time soon, so no such forums have been organized, never mind announced.

Nope, the A-gay board and the Democratic Party operatives and candidates and gay political animals climbing up the power-ladder, who depend on a compliant and controlled gay voting and donor bloc, are not interested in giving up their self-anointed positions as community rulers.

As such, knowing this high-power clique, over-represented by lawyers, which doesn't make a big move without all the chess pieces and their moves well thought-out far in advance of the change occurring.

Just like the Santa Claus concept, there is no search underway to hire a new executive director because the decision has already been made, I believe, to move Jim Carroll to the top spot at EQCA. We're been seeing the installment of Jim for a number of weeks now.

The first sign was in the December 16 Bay Area Reporter's glowing story about EQCA hosting an elite cocktail reception for top donors. No mention of Geoff's seeming absence or reasons why Jim was the evening's host. The star of the piece was Jim, also featured in this photo, with mic, snapped by Matt Baume:

On the final day of 2010, EQCA posted a release about four bills going into effect on January 1, and the usual quote from boss Geoff is missing. Jim gets the leader's quote. That comes on top of a year-end solicitation, touting the org's great promises for the future, and it was signed by Jim.

I give him credit for being so under the radar, while serving as the executive-director-in-waiting. Many have no clue as to who he is or what he does, and it's difficult to locate much relevant info on his leadership and grassroots skills.

Frankly, I have no idea what he does or what his community leadership qualifications are, so I'm on a learning curve here. Some details emerge from a January 2009 interview he gave to Democratic GAIN:

1. Describe your job
My responsiblity [sic] is to execute the tactics necessary to implement the Executive Director's strategic vision and make that vision a reality. On a day-to-day basis, that means allocating resources to accomplish our goals, including financial resources, human resources, technical resources, etc.
2. How would you describe your career path? How did you get started in progressive politics?
I was a commercial lender at a large bank. My portfolio included many non-profits, so I was required to understand the intricacies of non-profit accounting. This led to a job offer from one of my clients to help them straighten out their books. Non-profit money management and operations, more broadly - led seamlessly to non-profit fund raising. It turns out that non-profit development was a natural fit for my skill set since selling commercial banking services is similar to acquiring donations. In both cases a conversation with the client/donor is required to convince them that investing their money with the bank or non-profit is the place where they'll find the highest return on their dollars. The combination of Development and Operation skill sets gave me a good start; from there I learned the Communications and Program/Field components on the job.

I've had fifteen years to learn: Five years at EQCA, and before that five years at the Breast Cancer Fund and five more at PFLAG.

If Jim Carroll is not the new leader of EQCA, I'll need a passport to the State of Shock.

And speaking of that new leader, and whatever the search process involves, when will EQCA start to respect the community it says it fully represents, and host a series of meetings up and down the state on what non-A-gays want from the org and its chief?

More than two long years after Jim and Geoff and the board of EQCA led us to defeat over Prop 8 and wasted $45 million doing so, it is a mark of shame, and dishonor to Harvey Milk's legacy that they supposedly embrace, that I am still screaming for EQCA to throw open the closed doors, let the gay sunshine in and engage average gays who can't afford to buy $350 tix for the group's gala in February.
Posted by Unknown at 12:12 AM
Email ThisBlogThis!Share to TwitterShare to FacebookShare to Pinterest