SF DPH Stats:
New HIV Infections Down 25%
[Correction: A friend informs me my math was off: "The decline is 36% over two years. Divide the decline (354 cases) by the baseline number (975 cases." I stand corrected and happily note the drop is larger than I thought.]

The new 2009 annual HIV/AIDS epidemiology report from the San Francisco Department of Public Health was released on paper in the summer, but was only posted to the web in the past two weeks. Such a delay may be due to the workload of city webmasters, and I'm just glad the new yearly stats are on the web for all to see.

Thankfully, the 2009 summary is more of the same good news with rates of new infections dropping still, as we have seen in other recent annual stats from DPH. The repetitive nature of the falling numbers is rather boring, year after year, and I can't believe I just wrote that continuing fewer HIV diagnoses is dull. We should have more of it. The banality of HIV epidemiology.

A word about my headline. Where I see the 25% drop is in the incidence estimates and confidence intervals from CDC methodology. The stats in my second citation go from 975 in 2006, down to 621 for 2008, giving us the 25% number.

The HIV figures are sliced and diced more ways than you can imagine, and all of the pieces add up to lots of positive developments in controlling and preventing HIV transmissions. Let's get to the top items of interest. 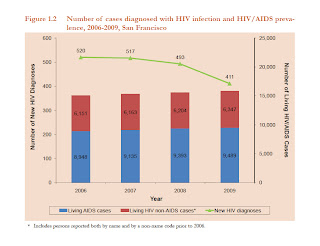 The number of new HIV diagnoses remained relatively stable between 2006 and 2008 and declined in 2009. The numbers are lower for cases in recent years due to reporting delay.


Using a statistical methodology developed by the Centers for Disease Control and Prevention, we estimated the number of incident or new HIV infections in San Francisco by year. Blood from standard HIV tests from newly diagnosed HIV cases is retested using a laboratory assay (called BED) that classifies individuals as having either a recently acquired HIV infection (within the past six months) or a longer-standing infection. Results from this test are used with a statistical adjustment for HIV testing patients to calculate HIV incidence.

Applying this methodology in San Francisco in 2006, 2007 and 2008, we find that the number of new HIV infections is declining (Table 1.5). While this decline is encouraging and corresponds with a similar drop in number of new HIV diagnoses, the confidence intervals overlap from year to year indicating that the declines are not statistically significant. 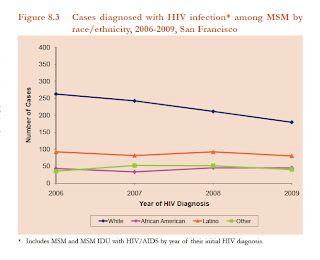 [Figure 8.3] Trends of cases diagnosed with HIV infection between 2006 and 2009 indicate that there is a decline among white MSM [men who have sex with men], while the number of cases for other race/ethnicity groups was fairly stable.

If I didn't know any better, I would suspect the SF DPH of tardiness in the web publication of the latest HIV rates happened just so the gay community could have a nice big gift of stats and charts, brimming with excellent news at this holiday time. Whatever the reasons for the publication delay, let's honor and laud the continuing reductions, all the factors driving down the numbers, and the sexually-active and sexually-responsible gay men responsible for the lowered rates.
Posted by Unknown at 10:26 PM
Email ThisBlogThis!Share to TwitterShare to FacebookShare to Pinterest