Larry Kramer Likes Scary NYC HIV Ad;
I Give it Thumbs Down 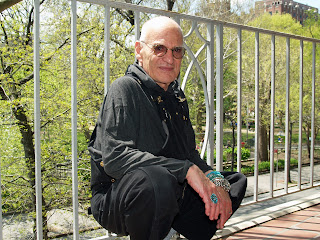 I'm not crazy about the controversial new HIV prevention of campaign from the New York City Department of Health. To my weary San Francisco gay PWA eyes, which have seen too many alarmist print social marketing campaigns that go out of their way to stigmatize people with AIDS, and use Fear! Alarm! Shock! to reach a gay audience, the NYC ad is a continuation of SF's lousy campaigns.

However, my pal writer and activist Larry Kramer has a few things to say about the campaign, and those who are objecting to it. Here's his statement:


to the nyc dept of health:

thank you. it's about time. this ad is honest and true and scary, all of which it should be. hiv is scary and all attempts to curtail it via lily-livered nicey-nicey "prevention" tactics have failed. dr hill knows this and her remarks below, once again, show her to be living on another planet. and since when is GLAAD in the hiv-prevention business? god help us if it is. gmhc is bad enough.

can we finally get real here? we are in the 32nd year, more or less, of a plague.

ONE OUT OF EVERY FIVE GAY MEN IN AMERICA IS HIV POSITIVE. AND FIFTY PER CENT OF US DON'T KNOW IT!

these are appalling statistics.

And dr hill and some dude at glaad is telling me that prevention efforts, as they are presently constituted, are working.

of course people have to get scared. i have said this since day one and i say it today.  they need to be scared into using condoms. into getting tested, into being responsible human beings. nothing so far has been able to bring a sufficient result to these requirements. why can't anyone see that? why can't our oldest aids organization see that? to say as dr hill does  below that "studies have shown that using scare tactics is not effective"  is, i believe,  an out and out lie. i have never seen such research. if it exists, then it is as irresponsible as dr. hill and mr/s glaad.

i see a lot of doctors regularly during the course of looking after my own health. every single one of them is telling me that they are seeing more and more young and usually white men who are educated and should  know better, sero-converting.

and with all the hoopla over hiv negative people taking this new once-a-day truvada "miracle cure" just so they can have sex without a condom, is going to be a nightmare of the highest order. i firmly believe this.

just as i firmly believe that NO prevention efforts can be rendered with the sugar coating it has been receiving since 1981.

i congratulate the nyc board of health for finally getting real. i look forward to even more and scarier public service announcements.

ps. i dont have email addresses for whomever runs the nyc department of health, or for dr. tom friedan at cdc or peggy hamburg at the fda. perhaps someone could forward this to them, dr. fauci perhaps.


Posted by Unknown at 1:34 PM
Email ThisBlogThis!Share to TwitterShare to FacebookShare to Pinterest