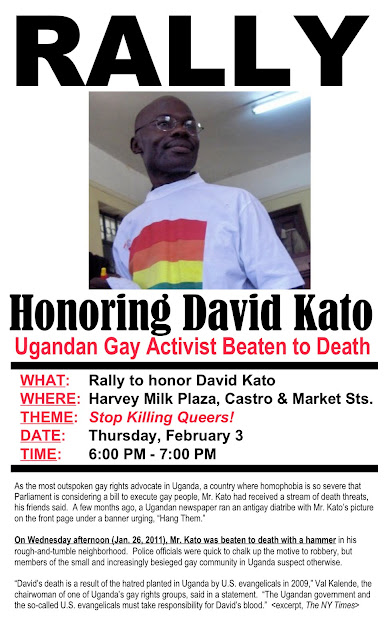 Today I learned that the rainbow flag and pole at Harvey Milk Plaza, which I believe is city property, are controlled by the Merchants of Upper Market/Castro, MUMC. I contacted them foolishly thinking they would work with Gays Without Borders for our February 3 rally at Harvey Milk Plaza from 6 -7 pm to honor murdered gay Ugandan activist David Kato.

The reply below from the head of MUMC makes clear they will be doing us no favors on behalf of our effort to stand in solidarity with the beleaguered gay community of Uganda. Between the death of David Kato and the still-pending death penalty bill jeopardizing the safety and very lives of gay Ugandans and people with AIDS in the country, I would think MUMC would bend their rules a small bit. Was I wrong, or what?

While hundreds of gay and human rights groups, AIDS leaders, and many politicians around the globe including Secretary of State Hillary Clinton and President Barack Obama, have condemned the killing of David Kato, called for an investigation into the death and pleaded for Ugandan political and religious to respect the lives and dignity of gays and PWAs in the African nation, the MUMC folks will not allow us to lower the rainbow flag, a small token of solidarity.

I appreciate the MUMC president saying he views the situation for gays in Africa as "horrendous," but it's a damn shame such thinking is not enough for him to fly our community's flag at half mast for a one-hour rally.

I would like to see proof from MUMC about all the requests they claim to receive, their agreement with the city to operate the flag pole, and papers about their supposed insurance costs. Let's also have a public discussion about a community advisory board to MUMC, to re-work the rules about when the rainbow flag at what is supposed to be public community space in the name of Harvey Milk.

There is no reason why the San Francisco gay community must accept at face value only the concerns of the business people in the Castro. If the Castro's public community spaces are indeed parcels of land that belong to all of us, MUMC will change its iron-clad rules about the rainbow flag.

Meanwhile, please show up on Thursday from 6 - 7 pm and show support for the gay Ugandan community, and demand justice for David Kato.

This the note from MUMC:

It is MUMC's policy to only lower the flag at half staff for special honors such as the deaths of Officer Jane Warner and Officer Jon Cook. When the flag was first put in place several years ago we were getting requests daily to lower it half staff for individuals and causes. We still get requests at least 4 - 8 times a month. If we honored every request, the flag would be kept at half staff most of the time. Therefore, we only lower it for very special honors within our community.

MUMC was the group behind getting the flag pole erected and maintains the flag pole. MUMC pays for the flags, maintenance and insurance which runs several thousand dollars a year.

As I am very sympathetic to your cause, (I feel what is happening in Uganda and the rest of Africa horrendous) I cannot grant your request at this time.

Posted by Unknown at 4:07 PM
Email ThisBlogThis!Share to TwitterShare to FacebookShare to Pinterest

Well, at least that was a lot more diplomatic than what Patrick Batt said. Not a single curse word or threat in sight!

They're just KILLING us with kindness.

Asshole. And illiterate to boot. "As I am very sympathetic to your cause, I cannot grant your request at this time." makes absolutely no sense.

Do you think it would help if lots of people contacted them at http://www.sfmerchants.com/merchant_associations/sfcdma/contact.htm

or show up to their meeting MUMC’s FEBRUARY MEMBERS MEETING is Thursday, February 3, 2011 starting at 9:00am, in the Upstairs MultiPurpose Room at Eureka Valley Recreation Center (EVRC), 100 Collingwood Street (between 18th and 19th Streets).

thanks for this info. YES, i think we should be at that meeting on thursday and press our case, that being MUMC has to change their rules for the _community_ space that is the milk plaza, including the rainbow flag that flies there.