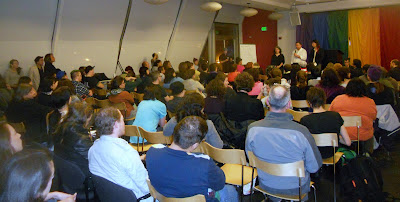 My report is partial because I was able to attend only thirty-minutes of the emergency community meeting tonight about the pending closure of the Lyon Martin queer health clinic. Here are the basics of what I saw, heard and said.

Easily more than 100 folks packed the fourth-floor meeting room at the San Francisco gay community center, and at the front of the room stood 4 members of the clinic's board and staff, engaging the assembled crowd in an open and forthright discussion about what's gone wrong. Let's give credit and thanks to these four folks, whose names I'm sorry I don't know, for presenting themselves to the community and not beating around the bush about the troubles.

I'd estimate thirty percent were transgender people, over all audience was under 30, quite a few colors of human rainbow were in the chairs and speaking up. Longtime trans advocate and Asian HIV prevention worker Cecilia Chung posed detailed questions about current clinic contracts for public and private dollars. Queer youth AIDS activist Jackson Bowman was the most gracious Oprah, running around sharing the mic.

From City Hall we had Supervisor David Campos urge the crowd to make their views known at the budget committee and the mayor's office. As I was leaving, Supervisor Ross Mirkarimi came in and waited his turn to speak. Not sure if Supervisor Scott Wiener was present before I arrived. Scott, lemme know if you were in attendance. [Pollo del Mar informed me Scott was there before I arrived.] 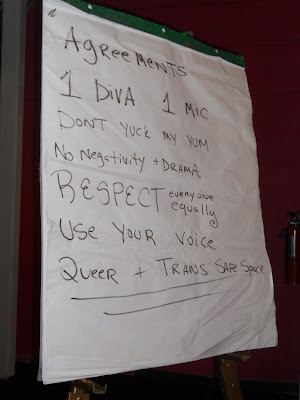 (Instead of an agenda on the poster to guide the discussion, there were agreements.)
In my few minutes of comment I stated the Lyon Martin problems come on the heels of the following community orgs either going out of business or facing major leadership and funding troubles: Academy of Friends, New Leaf, SF Pride, and the SF Community Center. And the crisis today is going to expand to other local orgs and additional California gay/HIV groups.

"Where is Equality California tonight?" [One trans hand went up.]
"Thanks for being here. When is Geoff Kors going to hold meetings to discuss what to do about the looming state cuts? Is anyone here from the Human Rights Campaign?" [No hands rose, but the giggles at HRC's absence struck a point.]

"We have a health care crisis in the community. You beautiful people showed up, while our official state and national groups stayed away. A-gays sent millions to HRC and EQCA in the past few years, and what have they delivered? More gays to grab guns, head off to the war in Afghanistan. And a fight for wedding cakes." [Smattering of applause.]

"Stop applauding! I need AIDS drugs and health care. Don't talk to me about guns, war, wedding bells without addressing local community health needs." [Pollo del Mar, an icon of the drag and fag communities who I've adored only from afar, introduced herself and simply crushed me in her embrace. Girl, you are fab!]

The second part of the meeting, with Gabriel Haaland serving as facilitator, was for a few things: Plan fundraisers, mobilize the clinic's clients, political strategizing. A good fifty people were hanging around, lots with old-fashioned paper notebooks and ink pens, itching to keep the organizing going.

Oh, there was talk of not allowing the clinic to close, but you'll have to turn to the clinic and others for those details. Lyon Martin may get a temporary reprieve, but let's get over our foolish head-in-sand approach to how they got to their latest crisis, and start to prepare for other California HIV and gay groups facing closure.

Hello, EQCA and HRC? Any idea about how you're going to directly help our drowning health care service providers?
Posted by Unknown at 10:29 PM
Email ThisBlogThis!Share to TwitterShare to FacebookShare to Pinterest

I appreciated your comments last night about the state of the Queer movement. Give me HIV medication and health-care any day over DADT!
-Bobbi

Right on, Petrelis. Thanks for the update; I will be out in the streets this weekend fighting to keep my healthcare intact.