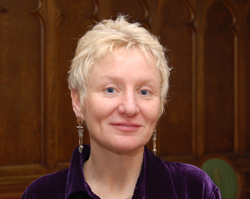 A top AIDS accomplishment in 2010 was the containment and neutralization of Sally Blower (picutred), the alarmist math modeler at UCLA's David Geffen School of Medicine who's built a troubling career peddling unfounded medical fears, most notoriously involving gay males and HIV.

In January of last year, Blower and the UCLA press office stoked fears of HIV resistance among irresponsible sexually active gay men living with AIDS in San Francisco, with a release predicting global health problems in poor countries because of the gay PWAs. After months of controversy, and Blower's inability to back up her claims with independent research, UCLA apologized for offending PWAs and gay people.

Since then, Blower has published additional scary math models on other AIDS issues, and even with the David Geffen School of Medicine's p.r. machine promoting still more gloom-and-doom from Blower, albeit without the usual lab-created alarm designed to generate news clippings that help keep Blower in rolling in grants, her September alarmist paper for The Lancet never crossed over from the medical journal into the mainstream press. A good sign.

If Google news alerts and general web searches, that fail to turn up any mainstream coverage of any new scary HIV math models of Blower's since the San Francisco community collectively objected to her methodology and findings last winter, are any indication, she's seriously slipping in generating ink for her computer models.

On top of that, the newest annual HIV epidemiology report for San Francisco was recently posted to the web and the matter of drug resistance strains is omitted. I would expect the 105-page epi report, which is chock-a-block full of data and research about all manner of complexities related to HIV transmission, to say something if indeed resistance were a genuine concern for the health department and local AIDS testing agencies.

This is the apocalyptic message from Blower's 2010 math model:

And not a damn thing about that threat in the 2009 HIV summary for San Francisco, hopefully showing once and for all that "Chicken Little" Sally Blower was wrong and her future research should be subjected to strict scrutiny.
Posted by Unknown at 6:58 PM
Email ThisBlogThis!Share to TwitterShare to FacebookShare to Pinterest