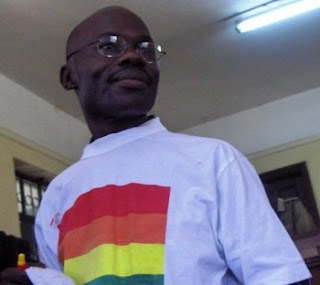 (David Kato, who was bludgeoned to death on January 26, wearing a rainbow pride t-shirt as he remained visible and served as a community organizer in Kampala.)
With several friends from Gays Without Borders at my side, I am proud to announce at this sad time that we are organizing a speak out over the murder of David Kato, our gay Ugandan brother who was murdered this week.

Citizens of San Francisco of all backgrounds, sexual orientations and gender identities, political and religious beliefs, or lack of them, are uniting to send a message to the gay community of Uganda: We stand in solidarity with you.

Here are the details of our protest:

We are asking everyone to bring signs specifically opposing the death penalty, hangings, stonings, state-sanctioned and extrajudicial executions. We also want posters addressing global gay, lesbian, bisexual, transgender, third-sex and intersex solidarity. Rainbow flags would help.This is a grass-roots action by Gays Without Borders, alias gays without a budget. Only you can make it happen and with proper fabulous signage and colors.

South African-born Clinton Fein, political artist and activist explains why February 3 was chosen as the date.

"Our San Francisco protest will coincide with the National Prayer Breakfast in Washington, D.C., taking place on the morning of Feb. 3.

"The Family, a secretive Christian organization behind the prayer breakfast, has more than enough blood on its hateful hands when it comes to gays and Uganda, and must be held to account," Clinton wrote in an email.

"Our aim is to co-opt the National Prayer Breakfast from the Left Coast with our loud voices and raised fists.

"Let the world know that some of the people behind this constitutionally precarious National Prayer Breakfast are doing a lot more than simply placing homosexuals in crosshairs on websites. They’re shaping deathly legislation and are one step away from handing out hammers. Enough is enough."
Posted by Unknown at 11:35 PM
Email ThisBlogThis!Share to TwitterShare to FacebookShare to Pinterest