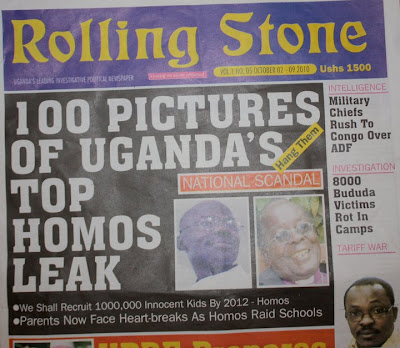 (The October 2, 2010, front-page of a hateful, demagogic tabloid in Kampala. Above the red-boxed "National Scandal" is a sideways yellow bar promoting "Hang Them!" Them being the two gays in the photos below, and on the left, wearing a white collar, is the now-murdered David Kato.)

(Screen capture from AmericaBlog last week.)
Last week, the high-traffic AmericaBlog founder John Aravosis wrote this about an HIV positive military vet convicted of having unsafe sex and not disclosing his status:


My first instinct is to hang the man. [Recently updated to now say: for what he did to all those women (and possibly men).]

Before I wrote my first post about the inflammatory opening, I twice emailed John asking him to clarify if he supported hanging an HIV positive person and if he supported the death penalty. When I received no reply, I posted my piece with a provocative questioning headline.

John eventually replied, but didn't address my two questions and I used his full email in a follow up piece, which generated this obfuscating note from him:


Now you're sounding reasonable, what you sent around by email was not. You claimed that AMERICAblog Gay called for all HIV positive people to be executed, and that's a lie. You weren't interested in having an honest discussion about a complicated and serious issue, you were interested in being sensationalistic and scoring "gotcha" points for traffic. This is a serious issue that affects people's lives on all sides, it should be treated as such, and not as an opportunity to play games.

I've defended you and your work countless times, and you may recall that the reason we know each other is that I reached out to you when my best friend was dying from AIDS - and his death is the reason I came out and got involved in gay rights advocacy. I don't treat these issues lightly and wont be goaded into doing so. I expected better from you.

Notice that John doesn't say if he supports hanging the HIV positive vet or opposes the death penalty. I never claimed his site called for hanging all people with HIV, and note that he doesn't cite an actual quote from me saying this, because he's good at turning the focus away from his sensationalistic original post.

He then correctly states HIV disclosure and transmission is an important issue, yep, which is why I reached out to him _before_ writing a damn thing and he chose to ignore my emails. Now, like the demagogue that he is and that has served him so well in building high-volume traffic, he's acting like an ayatollah and claiming I'm not interested in a serious discussion. If you don't play by John's debating rules, which he amends to suit his needs, then anyone who questions him is not interested in a serious chat.

I'm not the only one troubled by John raised the specter of hanging an HIV positive man. Over at Bilerico, HIV poz writer Todd Heywood had this say:

So when the Jan. 20 post by John Aravosis supporting the hanging of a man convicted of failing to disclose his infection came across my inbox, it was a shocking reminder about how much work is left to do in relation to HIV and criminalization.

Also funny: We've been spending weeks talking about the "violent discourse" on the right, and here this pseudo-liberal asks for someone to be killed (I only want the government to kill him, he'd plea.) Gotta watch out for those pseudo-liberals - they can cause more damage than honest rightwingers.

In a tragic ironic turn today, AmericaBlog's deputy editor Joe Sudbay quotes from the BoxTurtleBulletin about the murder of Ugandan gay activist:

David Kato was a spokesperson for Sexual Minorities Uganda (SMUG) and one of the plaintiffs (or applicants) in the successful lawsuit seeking a permanent injunction against the Ugandan tabloid Rolling Stone (no relation to the U.S. publication of the same name). Kato was one of three applicants who had been named by the tabloid under a headline tagged “Hang Them!”

Here we have AmericaBlog citing the "Hang Them!" encouragement from a rotten newspaper, while John and Joe probably see no link between what the Ugandan tabloid said on it's front page above a photo of the now-dead Kato, and their site's recently broaching of hanging an HIV poz person.

As I've shown above, despite repeated attempts to force John to once and for all clarify his views on hanging of any HIV poz person or the poz vet he finds despicable, and his view on the death penalty, he's choosing not to address the questions. The silence of AmericaBlog on hangings of any sort is deafening.

Whether it's a homo-hating Ugandan tabloid or a revenge-driven, sanctimonious American site, when the word hanging comes up related to gay or poz people, I get damn uncivilly upset.
I oppose hangings, lethal injections, firing squads, stonings and any and all other forms of state-sanctioned and extrajudicial executions and killings. That doubly applies when the person might be gay, lesbian, bisexual, transgender, third-sex, intersex or HIV positive.
Posted by Unknown at 2:48 PM
Email ThisBlogThis!Share to TwitterShare to FacebookShare to Pinterest