HRC's SF 'Action Center'
is Now Just a Store
George Orwell would have chuckled a few times over how the Human Rights Campaign skewed the English language when describing their clothing/housewares/useless junk outlet on 19th and Castro as an action center. The closest it came to being a space to organize or politically strategize was when gay tourists took action and whipped out their wallets to spend money on items emblazoned with the HRC equal symbol.

In December, when the group announced it was taking over the lease for what had been Harvey Milk's camera shop and genuine action center for the community, HRC's release stressed the supposed action center aspects of its commercial venue.

That was last month, and now HRC is now longer pretending their store is anything but that and the empty words action center have been dropped from the sign on their old store's window: 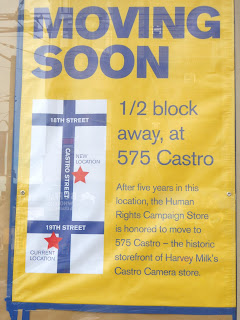 This is one of the banners in the Castro storefront that will soon start peddling HRC merchandise: 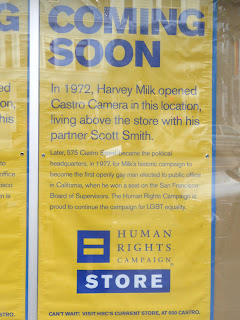 As I was snapping photos, HRC store workers and volunteers were going in and out of what used to be Harvey's shop, and I took this picture of the still under construction interior that is starting to fill up with t-shirts: 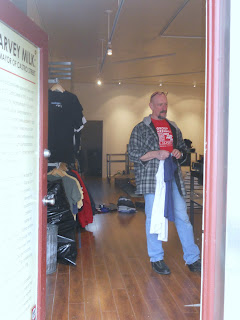 It feels quite strange to be saying something nice about HRC, but here goes. I like that they're finally being honest about the proper word to define their store. Now if only they would get with democratically engaging the community beyond their A-gay donors and Democratic Party bosses, that would really please a lot of gay folks.
Posted by Unknown at 3:58 PM
Email ThisBlogThis!Share to TwitterShare to FacebookShare to Pinterest

Did they ever agree to do anything with the Trevor Project in this space?

i have no idea whatever became of sharing the space with that org. if i hear any word about the trevor project setting up something at the HRC store, i'll share the info.

I understand that the sale of items will benefit the HRC.

Patrons will actually be getting something tangible for their money. It will probably help some of the shoppers to "feel good" because they made a purchase.

This may not be the most magnanimous use of the space, but it could have far worse tenants.

I hope it turns out to be a great store, and I wish the HRC success with this venture as well as their stated mission.

Perhaps - but they're still lying with one of those signs by calling their mission a "campaign for LGBT equality."

Actually, they're lying about "equality" as well.

Its just a gay Wal-Mart.