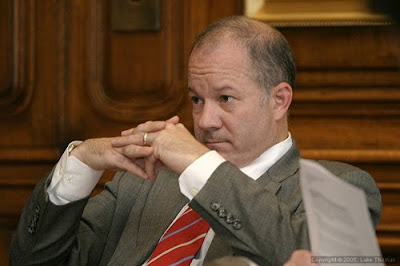 (While our biggest daily is happy to keep Steve Kawa's mug out of the paper, I'm equally pleased to run as often as is warranted. Credit: Luke Thomas, Fog City Journal.)
I'm so old. How old? Old enough to remember when the dailies in major cities informed citizens about key players at City Hall before a backroom deal was signed, sealed and delivered to the voters who were keep in the dark about the politicking. The San Francisco Chronicle is a sad example of a daily that once shined a light on the municipal insiders, and kept some of their maneuvering in check. No more.

Now, the paper keeps former mayor powerhouse Willie Brown on staff as a political gossip columnist and (dimming) star writers wait until after the deal goes down to pick the interim mayor to inform readers of facts that should have been reported a long time ago.

This nauseating info appeared in the Phil Matier and Andy Ross column on Sunday only in the print edition, and didn't hit the web until days later. Let's unpack this news item:

From the selection of the new mayor to the pick of the new district attorney, one of the most important players in the recent turnover at San Francisco City Hall was the one you saw the least.

That would be Steve Kawa, ex-Mayor Gavin Newsom's chief of staff. New Mayor Ed Lee calls him "my right arm."

Who kept him out of view? The Chronicle for one. Nothing of relevance about Kawa integral role in the selection process appeared in the paper, making it so easy for him to be the player we saw the least. Kawa and his bosses sure must appreciate the omission.

Kawa, who came from a working-class Boston family, moved to San Francisco after coming out of the closet and landed a job with then then-Supervisor Tom Hsieh.

Willie Brown hired him away when Brown became mayor, and for the past few years Kawa virtually ran the city as Newsom sought higher office. For Newsom, one of Lee's strongest selling points as interim mayor was that he would keep Kawa in place.

So the all-but-invisible Kawa was essentially the mayor for a number of years, and Matier and Ross and the Chronicle couldn't be bothered to make this fact news. This should give all of us San Franciscans good reasons to continually ask, what else is the Chronicle not reporting that is of vital concern to the electorate?

Kawa is so little known that most people get the pronunciation of his name wrong - even Brown, who insisted on calling him "Ka-wa."

He is so little known in large part thanks to the Chronicle's consistent policy of keeping Kawa out of its pages, until now, and when he is reported on it's in a faux-folksy humorous way, such as this column.

To which Brown responded: "The way I say it, people think you're Japanese. And there are one hell of a lot more Asian voters in San Francisco than Poles.

"So just keep quiet, and whatever you do, don't get your picture in the paper."

From the looks of things, it was advice well taken.

Oh, hardy har har! As our municipal democracy was getting shredded by that jokester Willie Brown and his cronies, which obviously includes the Chronicle, they all colluded to keep Kawa under the radar and his visage out of the paper. I need no more proof that our major daily is not reporting vital news without fear or favor.

Early last week, the Chronicle gave us additional fodder about their telling important facts only when they and their cronies have done their dirty work. From a January 10 editorial:

Replacing Newsom will be veteran city administrator Ed Lee, who will be the city's first Asian American mayor. Can an interim or caretaker mayor run the city with strength and authority, especially one who took the job reluctantly? He must establish himself as a leader and stand independent of the forceful insiders such as former Mayor Willie Brown and Chinatown power broker Rose Pak, who pushed for his appointment. Their interests may not always align with the entire city's. ...

This is grand. Chronicle columnist Willie Brown and his buddy Rose Pak have agendas don't all bode well for the rest of us? I'm shocked, shocked at their wily ways! Oh, what would we do without this paper to tell us such things?

These tidbits about Kawa serving as shadow mayor for Newsom and the Brown/Pak machine keeping their interests satisfied at City Hall, are the best we can expect in terms of muckraking from the Chronicle. More like surface dust-raking is what we've been given.

And now that it's over, expect Kawa, Brown and Pak to receive the same deferential coverage at the paper.
Posted by Unknown at 10:03 PM
Email ThisBlogThis!Share to TwitterShare to FacebookShare to Pinterest

Thanks for your reporting on this, Michael.