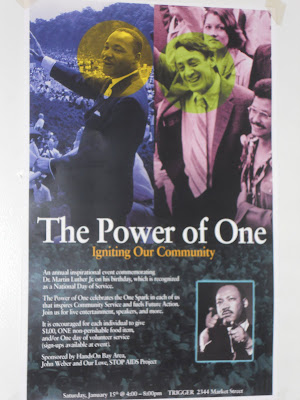 (This poster is taped up around the Castro. Credit: Petrelis Files)
Even if the Tucson tragedy had not happened, I would still have major issues with an event marking the Martin Luther King, Jr, holiday with a January 15 fundraiser starting with the imagery used and the name of the bar hosting it. Money raised will go to the key organizing group the Stop AIDS Project, and a portion of the profits shared with the SF Food Bank, the SF LGBT Speaker's Bureau, and Hands On Bay Area.

Here we have nonprofits marking National Day of Service with a money-making event in a bar, a commercial venue I never associate with King and for an activity many don't equate with public service for the betterment of humanity, and the poster for the fundraiser is illustrated with the heads of King and Harvey Milk highlighted as if they were targets.

And the really galling thing is that the name of the host establishment is Trigger. Yeah, the Trigger club on Market Street is the place, and because of two madmen with guns who pulled the triggers, King and Milk were assassinated and the last thing I want to do is be near any event for King's weekend at an venue having to do with weapons.

Is there any sane gay or straight person who genuinely believes King and Milk would approve of any group marking their lives and legacies at commemoration time at bar and one based in gun culture? Was the assassins' shooting gallery unavailable?

Tone-deafness is the only way to describe some key elements behind this project. I don't know how the organizers and promoters of what is officially named "The Power of One; Igniting Our Community" could be so insensitive with so many aspects.

The promoters inflame us with their wording, and after decades of the Stop AIDS Project and other components of AIDS Inc endlessly igniting fires of controversies with their social marketing campaigns, we need to douse the pyromaniacs behind the fundraisers and ads with cold water and fire extinguishing foam.

Let's stop with gay blacks in the cross-hairs, and the walking, ticking time-bombs used to describe people infected with syphilis, and the "Don't Be A Bitch" ads, and the target imagery of King and Milk, along with the flaming language, and practice some peace, love and understanding in how we organize and come together. 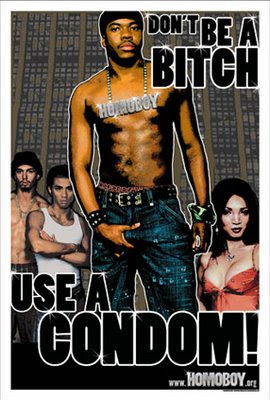 Posted by Unknown at 9:02 PM
Email ThisBlogThis!Share to TwitterShare to FacebookShare to Pinterest