Gay Egypt Call to Action:
Get in the Streets & Protest! 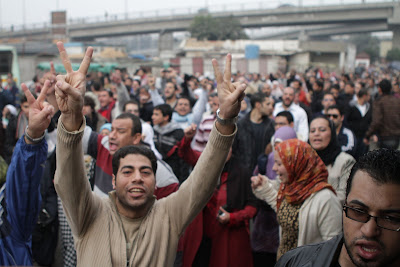 (Egyptian protesters flash the peace sign, January 28. No inference is implied as to the sexual orientation of anyone in the photo. Credit: Sarah Carr's Flickr stream.)
The handful of people behind the Gay Egypt site, were among the first to support global actions of protests in 2005 and 2006 over Iran hanging two gay teenagers, which is when I first worked with them, and like so many, I've been impressed with their social networking site over the years.

Yesterday, the site shared this message and call to action. I am sharing the full text of it, and hope we soon receive positive word from our gay brothers and sisters in Egypt about their efforts to democratize their nation. From Gay Egypt:


27 January Egypt update: El Baradei expected to arrive from Vienna at 19.15 Cairo international airport terminal 3. Protests already restarted today in Halwan, Cairo, and Ismailia. I can personally verify that on each road leading into Tahrir Square police in vans are already waiting (as of 1pm) for anticipated protesters. If I had to put a number I would say around 100, including those inside vans, at the entrance of each street into the main square.

I saw a large number of police at other points including Medan Opera. Plain clothes officers also waiting and a few already carrying long sticks.

Last night police blocked all access to parts of Tahrir Square after 9pm. Hundreds of shield and baton wielding recruits ran from one suspected point of protest to another. Plain clothes officers redirected pedestrians while others carried large sticks, and beat some who failed to escape from repeated small protests near to the Corniche. Even onlookers were effected by a cloud of tear gass. We hope to post some photographs shortly.

Egypt's gay and lesbian community has had enough of years of police brutality and torture and GayEgypt.com calls on all lesbians and gays to join their brothers and sisters on the street to peacefully express their demand for immediate change.

Speaking of getting into the streets for global gay issues, don't forget there is a solidarity rally on February 3 in San Francisco at Harvey Milk Plaza to protest the murder of gay Ugandan David Kato. More info here.
Posted by Unknown at 12:45 PM
Email ThisBlogThis!Share to TwitterShare to FacebookShare to Pinterest