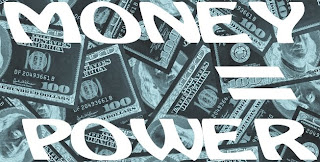 I had an inkling the National Rifle Association and its affiliated NRA Foundation were flush with funds, but until today I didn't know exactly how many millions flow through these non-profit advocacy group. Thanks to the 2008 IRS 990s for the NRA and the NRA Foundation posted at GuideStar, I can share important figures on them.

However, before we get to the numbers I wish to point out that neither the NRA nor the foundation on their sites make any IRS 990s available for public inspection, and they also don't link to the tax filings at the GuideStar site. A small, but important, fiscal transparency problem in need of pointing out.

Wayne LaPierre, the head of the NRA received a compensation package totaling $1,281,635. The leader of the NRA Foundation, Wilson Philips, was paid $664,907.

At the other end of the political spectrum on guns, the Brady Center and its affiliate the Brady Campaign are no match financially for the NRA.

Unfortunately, the center and campaign share the same lack of disclosure as their sites as do the NRA and its foundation.

In terms of executive compensation, the president for both Brady non-profits, Paul Helmke, came to $249,555, and the public face and director of the groups, Sarah Brady, was paid $141,112.

I don't mean to be flip about the enormous gulf between the gun advocates and the control activists, but it's clear the NRA totally outguns the Brady Center in terms of financing, and in America's gun politics money is power. That has got to change.
Posted by Unknown at 1:40 PM
Email ThisBlogThis!Share to TwitterShare to FacebookShare to Pinterest

Michael-
I apologize for posting this here, but I didn't know where else to put it. I wanted you to see this unbelievable web posting and video from Stop8.org.

http://stop8.org/
(First item on the page, or scroll down for the video)

Stop8 reports that EQCA has apparently decided on its own that there will be no repeal effort. The EQCA website is still telling the public that there should be a ballot effort in 2012, but the Managing Director Jim Carroll told Stop8 that it is not even on his radar screen.

The Stop8 spokesman tries to justify not going ahead with repeal in 2012. But he bases that conclusion on a ridiculous argument that the opposition has kept its "campaign structure in place".

He also thinks that that the Prop 8 "campaign structure" has been maintained for decades - going back to Prop 22 in 2000 or to the "1980s" when he erroneously believes there was a ballot fight on marriage in Hawaii.

This is wrong on so many levels, it would take several pages to lay it all out. It is unclear whether this bizarre and nearly incoherent rationale came from Stop8 itself, or whether EQCA suggested it.

BTW, I agree that we should not go to the ballot in 2012, b/c the odds are good that we will win in court. But how can EQCA make that decision in secret and unilaterally? I hope you will use your impressive muckraking talents and find out what the real story is here.
-David