The inaugural edition of the German Gems roster of new movies transpired on a single day at the Castro theater last January. I attended the screening for Margarethe vonTrotta's new work "Vision," based on the life of Hildegard von Bingen starring the great European actress Barbara Sukowa, and enjoyed the film and screening immensely.

Organized by Ingrid Eggers, the former program director of our local Goethe Institute, German Gems was a brief return to the annual showing of German films in chilly January, which was the month she used to hold the Berlin and Beyond festival that she started several years ago. With her retirement from the institute, that festival was moved to warm October to coincide with a German film showcase in Los Angeles.

I caught only one film at the revamped Berlin and Beyond festival, "Pope Joan," a big-budget multi-country-produced epic that was in English, and co-starred John Goodman, formerly of TV's comedy "Roseanne." The film was a gorgeously costumed and decorated portrayal of the controversial Catholic woman's life and rise to head the Vatican, and was very entertaining.

However, the new organizers put on thick and annoying airs of kitsch and stultifying haughtiness. The former welcoming attitude when Ingrid run the festival was gone and sorely missed, but there is good news to share.

Ingrid is back at the Castro this weekend, with cold and rain predicted, elements that only add to the deep and thoughtful Germanic nature of some of movies shown. The new edition of German Gems has expanded to three days, allowing Ingrid to program more movies. 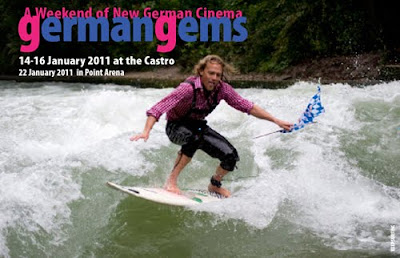 The line-up includes the new film from Percy Adlon ("Zuckerbaby," "Last Five Days") on opening night at 7 pm, "Mahler on Couch," about a famous visit the compose made to Sigmund Freud, and a bevy of narrative features and off-beat documentaries, with one looking at something I never knew existed - river surfing. The above photo is from "Keep Surfing," showing on Saturday at 2 pm.

I'm looking forward to the cinematic treats that will be up on the silver screen, but it won't be just the movies that will satisfy. I expect and anticipate a warm, very relaxed and hearty welcome from Ingrid and her staff and her volunteers. Those qualities, and a whole lot more, were what drew myself and many others to the diverse programming she put on at the institute and the old Berlin and Beyond festival.

When Ingrid held programs at the institute she made it into a salon, one full of good conversations and with a hostess presenting the best cultural and political ideas of her native country, and making her guests hungry for more discussions and activities about German arts and heritage. You can count on that salon feeling, expanded a few times in the enormous Castro movie palace, this weekend.

The city of San Francisco and German film fans are damn lucky to have Ingrid living in our midst, and bringing us new movies in a welcoming atmosphere that reflect her personality. There will be German gems on the Castro's screen this weekend, but the real gem of it all will be the woman responsible for putting it together - Ingrid Eggers.
Posted by Unknown at 3:50 PM
Email ThisBlogThis!Share to TwitterShare to FacebookShare to Pinterest