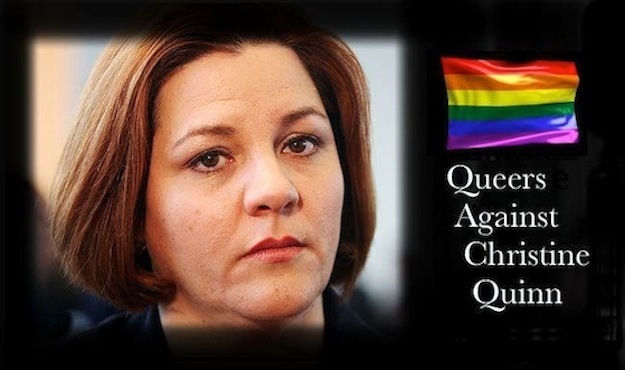 This is a textbook example of how an elected official, this time of the LGBT Democratic variety, exploits a tragedy to gain votes in the middle of election.

New York City Council Speaker and out lesbian Christine Quinn and her friends in Equality Inc world are promoting a rally and vigil in Manhattan tonight for slain gay man Mark Carson, who was killed over the weekend in Greenwich Village.

The gay community center's release about the vigil mentions only one participant, Quinn, as does the GLAAD alert, along with the Anti Violence Project's (Quinn former employer) announcement.

Paying attention to Quinn and her minions exploiting Mark Carson's murder for her mayoral campaign is Louis Flores of the Stop Christine Quinn organizing effort, and Flores is not taking the co-opting of the tragic death sitting down. The Village Voice's writer Sydney Brownstone shares the details:

Expressing the LGBTQ community's grief and outrage following the hateful murder of Mark Carson in the West Village on Friday, several LGBTQ groups are co-sponsoring a rally held at the LGBT Community Center tonight. Speaker Christine Quinn jumped on the rally as well--and the Facebook page for the event lists Quinn as the only politician involved.

Still, not all of New York City's queer community feel that Quinn has her heart in a sincere place. That's why they'll be taking their vigil for Carson outside what was formerly St. Vincent's hospital at 5:30 p.m., when activists and mourners will ask whether Carson could have been saved if the hospital hadn't been shuttered.

"A lot of people are agreeing that Christine Quinn is trying to politicize today's march," said Louis Flores, an organizer with Queers Against Quinn and a St. Vincent's activist group. Flores also wonders whether Carson, who was shot through the cheek, would have survived had he been taken two blocks away from the scene of the crime to St. Vincent's, rather than Beth Israel, which is located across town from where Carson was shot and lacks a Level 1 trauma center.[...]

Glad to see Flores and others holding Quinn accountable, and for reminding everyone about her shameful role in the closing of St Vincent's hospital.
Posted by Unknown at 2:32 PM
Email ThisBlogThis!Share to TwitterShare to FacebookShare to Pinterest

A New York Times piece dated April 30, 2013 says or reads, "The hospital closed because it was $1 billion in debt and went bankrupt before any development could get off the ground. In the time of the budget crisis, neither the city nor the state offered St. Vincent’s enough money to bail it out. Ms. Quinn was part of a task force of public officials and labor leaders working with Gov. David Paterson that tried to save the hospital, and it would be difficult to apportion blame."

Can you or the activist/author named in the piece comment as to why your claims are not being not supported in the New York Times?