A Queen Tells Me I Have an 'Unattractive Poz Face' 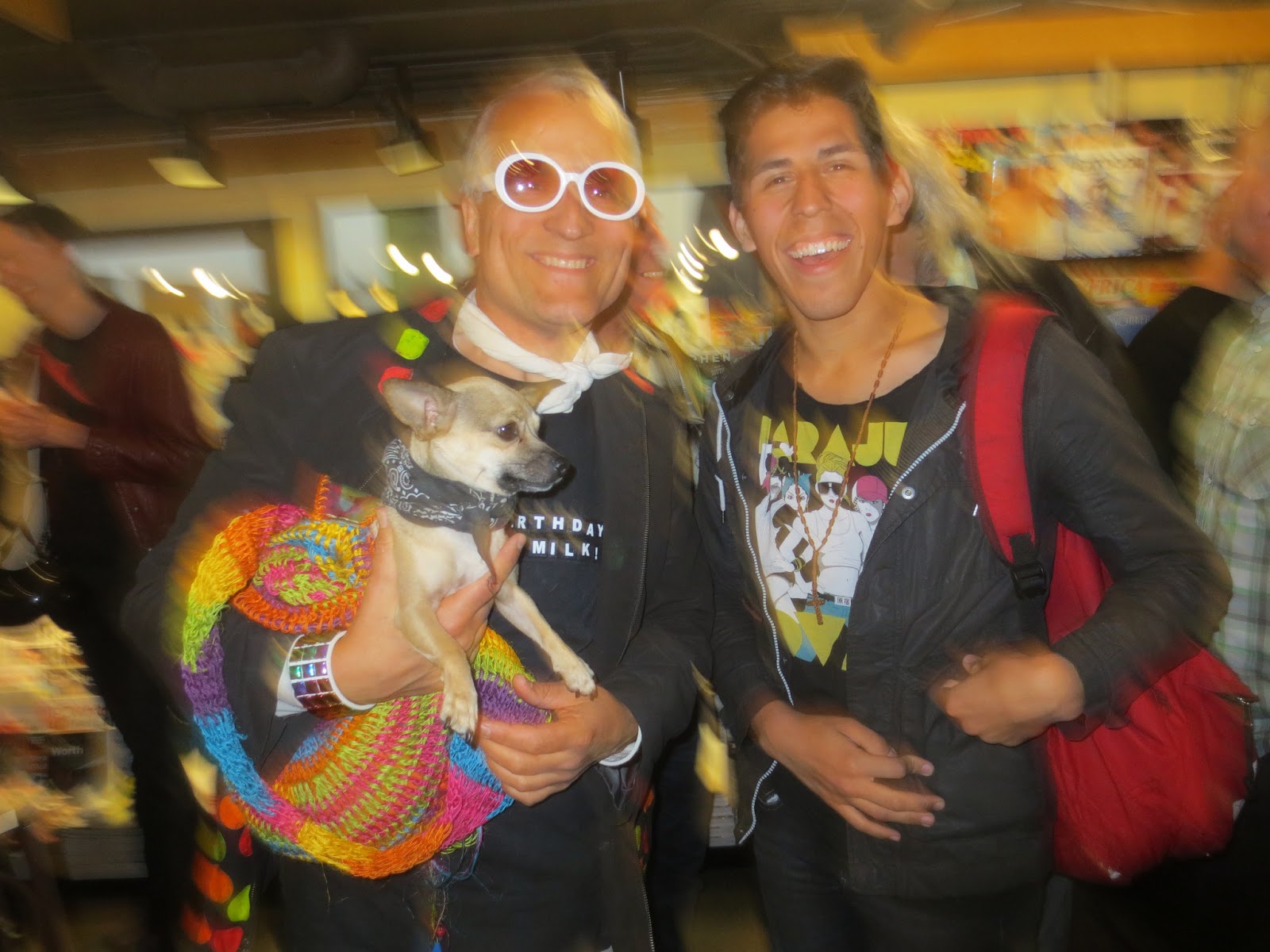 [UPDATE: Bruce Beaudette and I finally had the chance to meet up and chat about this episode. He told me he was speaking about attractive and unattractive faces in a queer brotherly way, and it was after I made remarks about his young friend Jose's handsome face. There was no harm intended in his campy comment and he's granted me forgiveness for mishearing and wrongly interpreting his words. 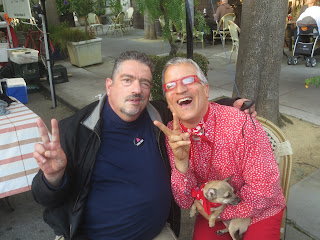 As fate would have it, we chatted while my face was in its most droopy stage from the Bell's palsy. We shared our feelings, poked fun at each other and life, and made peace. To mark the occasion of clearing the queer air, we snapped a photo of us homo-hamming it up.Bruce requested that I say my eye was swollen because he has a really huge penis and when it was hard, and he was trying to get me to blow him, his cock missed my mouth and hit me in the eye!]


The queen on the left said something totally rude to me yesterday at Books Inc after the panel about Harvey Milk concluded their talk. Don't know her name and see him at lots of protests, but his younger friend is named Jose. I snapped this photo before the celebration of Harvey's birthday. Good thing because I wouldn't have been able to after hearing his remark.

Schmoozing after the formal portion of the program ended, I told Jose how delighted and impressed I was that a young queer person came to the book reading and spoke up to tell us movement elders that he was educating himself about homo history. Told him it would be easy to remember his name having heard him talk during the discussion portion of the program.

Then the queen in a camp tone said, "I remember Michael's name because he's got an unattractive poz face." She chuckled at her rude comment.

"Well, the important thing is I'm alive and I like my face," was all I said before standing up and walking away. The jolt of having the stigma of living with AIDS and going through bodily adaptions thrown in my face, pardon the expression, was a reminder of how people with HIV disease are not, ahem, immune from stigma from within our own Castro community. 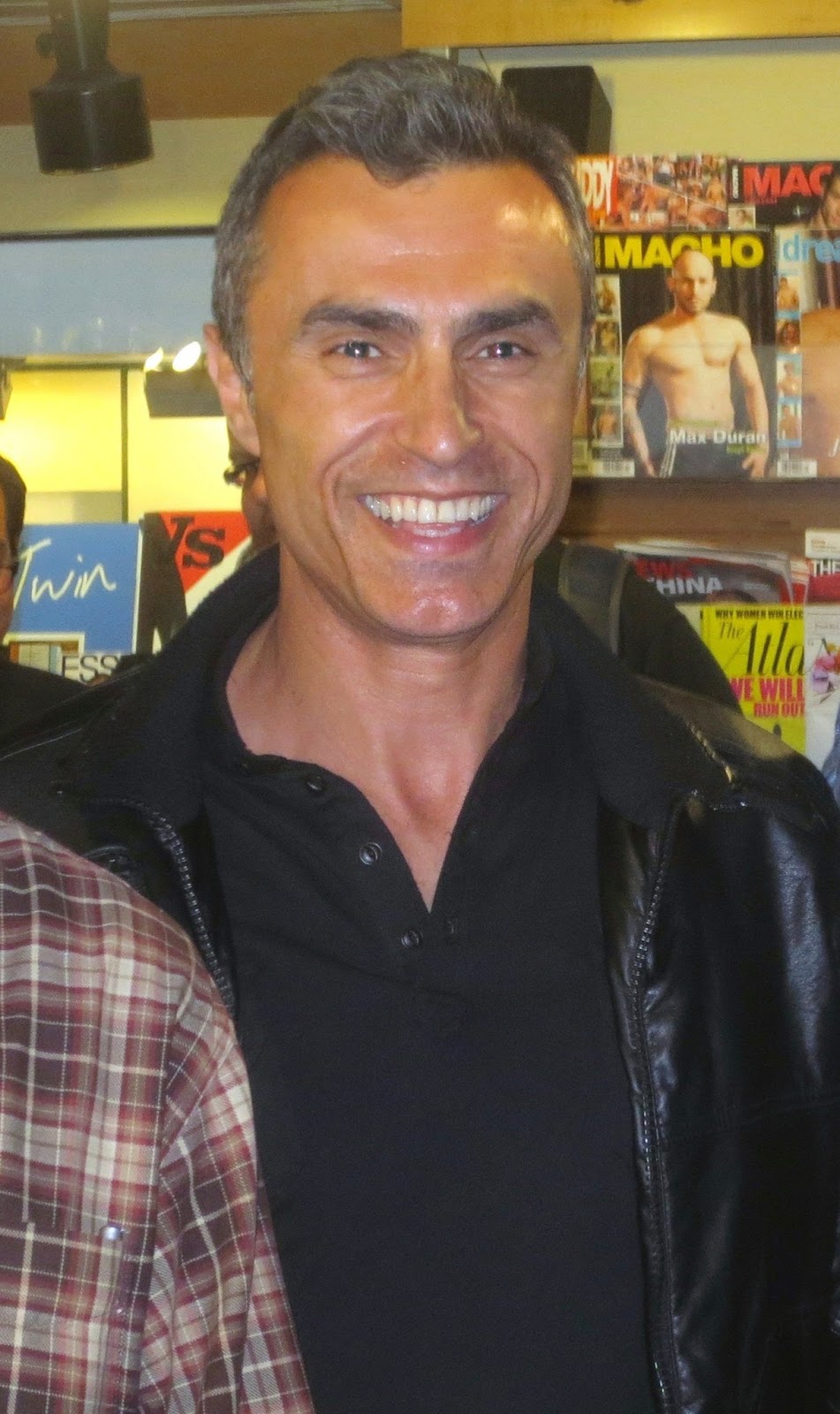 As if the goddess felt my pain and understood I needed some faith restored in queer humanity, Danny Nicoletta's friend Peter, pictured, stopped me on my way out to say how much he appreciated the anger of ACT UP, what it accomplished and everything he'd read by Larry Kramer. Peter made me smile and I left the event feeling upbeat and the anguish hearing the queen's words about my began to diminish. 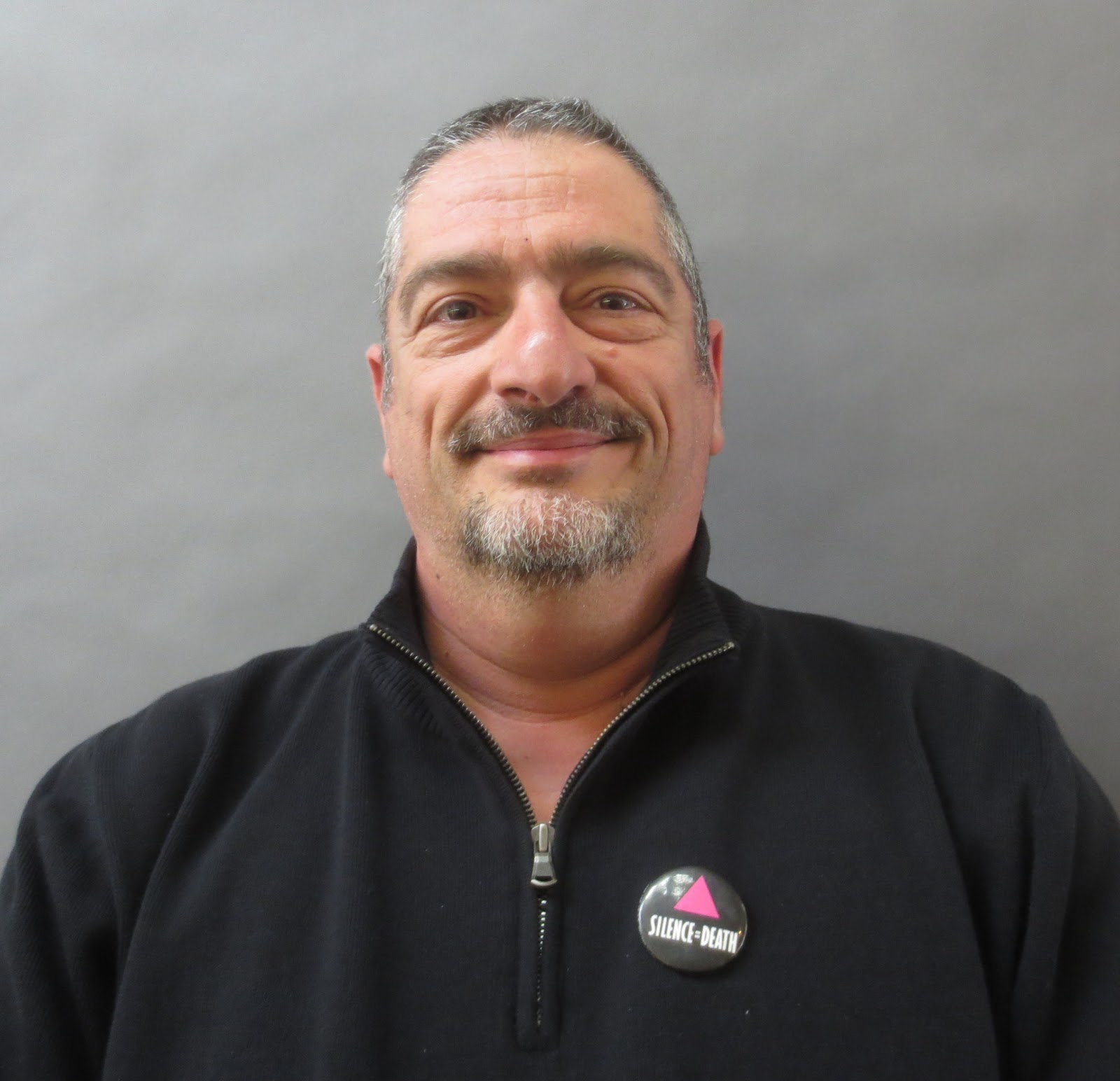 To manage the stress from the episode, I yesterday went to the Immune Enhancement Project and had a wellness-restoring acupuncture treatment during their drop-in clinic for people with AIDS. There were others PWAs with poz face or other outward signs of body changes, and I went out of my way to make a joke and smile for them.

I stopped at Bike Dog Bikes on my way home to see my friends and one of them, Emily, took this picture of my smiling queer poz face.

Let me close with some wise words and advice from Mark S. King, a PWA who blogs at My Fabulous Disease, from his cover article in the latest issue of POZ magazine:

Today, our attitudes about HIV and other gay men range from self-righteousness to outright contempt. From whatever our vantage point, we have shamed and stigmatized everyone else into a corner, and the result is a community in revolt against itself [...]

It might be easy to doubt this gloomy view of the gay community. None of us like to believe ourselves guilty of treating “the other” badly. The only thing we admit for sure is that we have been mistreated and misunderstood. Our self-interest is telling.
Maybe the problem is that, beyond the convenient anonymity of online  hookup sites or mobile apps, you don’t usually see HIV stigma in all of its black-and-white ugliness. You don’t hear its voice.
Listen closely to the ugly words of stigma.
Posted by Unknown at 11:41 AM
Email ThisBlogThis!Share to TwitterShare to FacebookShare to Pinterest

Michael, I'm sorry you experienced such profound insensitivity, which I know is especially painful coming from another gay man. But the antipathy some gay men feel towards people with HIV is almost palpable these days and it is obvious when one reads the comments posted to articles (on gay blogs) about HIV criminalization. There are those who see us solely through the prism of our HIV; we have been dehumanized, reduced to a virus and to our potential to infect others. It is sad and it would be nice if there were more HIV negative gay men speaking up and taking action against such stigma. There are a few, but not very dang many.

You go with your ferocious poz self, Michael.

Consider me one of those standing up and saying something.

I look at the picture of that guy, clinging to his Chihuahua with the white, age-inappropriate-unless-you're-a-rockstar-like-Elton-John sunglasses and his The-Boys-in-the-Band era scarf, and actually feel compassion.

He was probably teased relentlessly growing up. And so the only way he knows to feel good about himself is to lash out viciously at others so he can feel better than, and superior than.

Don't take it on Mike. Feel compassion for someone who clearly knows no better. It's 2013, for fuck's sake. This wasn't about you.

Sorry you had to endure this, Michael, after all you have done to make life better for fellow queers. Sometimes I think the epidemic of HIV stigma is worse than the epidemic of HIV, and it stinks. It's a major reason so many people put off testing and getting counseling and treatment. We'll never eradicate HIV unless we first eliminate the stigma -- Jim Eigo

I know the "queen" in the picture above and I'm shocked at the utter rudeness and total insensitivity of such a ghastly comment. I'm going to post the link to your blog post on his Facebook page and we'll see what kind of a response I get.

Meanwhile, as an HIV-negative gay man, I can't say I have any idea how horrible it feels to be mistreated because of an ignorant visual perception. Color me stupid, but when I look at your face I see a brave, determined man whose passion for life is an inspiration.

Keep sticking your face in everyone else's face. The community needs more men with balls like you.

I hope you asked the guy whether he is hiding a tracheostomy tube behind that white rag he's wearing around his neck.

The gods have a way of punishing people for their pride. Especially such arrogance about someone being poz. It takes a very brave person first off to be honest about their being positive. Namely because even among gays who know better we still treat people who are poz as pariahs. When we should be the very minority uplifting each other no matter what one's status tends to be. I fully believe in +/- relationships. At the end of the day there are worse things than being + like being an ignorant asshole.

I'm stunned.
what people forget is that what they say about others says a lot about themselves.

if you're the type to deal with your pain by inflicting it onto someone else in order to make yourself feel better, you're walking in your own hell.

and then there are those who have gone through a lot of hurt and rejection and still find the capacity for love. that takes balls, grace and belief in humanity.

Michael, glad to know you are such a person

Remember friends, just because someone robes themselves in bright colors and splashes on a little glitter, doesn't mean that in their heart they are truly Radical. You can't always judge a book by its cover, and there are few things more unattractive than AIDS stigma.

Some people surround themselves with the young and beautiful and feed off of it like vampires.

And some of us who are young and beautiful know that it is a temporary condition that will fade sooner than later.

I'm am deeply sorry you had to endure such ignorance and disrespect. I admire you a great deal. please keep up the good work.

It disgusted and saddened me to hear that comment made to you in person. I guess trolls are now working face-to-face as well as online. Unfortunately, I’m not surprised considering what the Castro has become and is continuing to evolve into.

I am so sorry and saddened that this happened to you. Some people have no class and are just plain mean. Society is hard enough already when it comes to judging people about how they look. I think you look good---screw him for his rotten comment.

So very sorry that someone could be so rude and nasty to you. Karma is a bitch and he will get his before he knows it. I think you look great

The queen on the left

Unfortunately, Clinton Fein’s comment about the queen on the left is really no different than what the queen on the left did to you. There’s no need to go “hating” on that queen on the left with the white sunglasses and making baseless assumptions about her (such as "age-inappropriate-unless-you're-a-rockstar-like-Elton-John sunglasses and his The-Boys-in-the-Band era scarf, his name is probably Harold and he’s stuck in 1978"). Ugh. He may or may not be stuck in 1978. I think 1978 is a good time to be stuck in frankly compared to today and the things going on. His glasses (the queen on the left) and the way he looks look cool/fine to me. I don’t care what he has on or how he looks. None of that is the point. How someone “looks” is unimportant and I’m never bought into that “age appropriate” bull shit. Who exactly decides what is “age appropriate?” A conservative society? Well you’re past 29 so you can’t wear that. Or you’re past 60 so you can’t wear that. [Scream!] People should wear whatever they want regardless of their age. There’s already more than ample hating on people within the gay so-called “community.” But I’m glad, Michael, that you didn’t take that route of critiquing the queen on the left that trolled you.

Looks are fleeting; for everyone! It is the inside, the substance that truly counts. I think your face is a beautiful face! You should have told that bitch that "thanks to this face, your AIDS riddled body wouldn't be alive!" Looks don't necessarily make you attractive, either. It is your innate qualities, and I personally find you not only beautiful, but full of fun and amazing creativity! Fuck 'em!