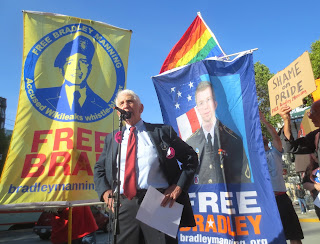 (Daniel Ellsberg, leaker of the Pentagon Papers, speaks at the April 29 protest at SF Pride's office over the rescission of the Grand Marshal honor for Bradley Manning.)

This information from the Bay City News wire's daybook calender for today was shared with me by a media professional who has access to the calender. In keeping with SF Pride's refusal to respectfully engage the at-large LGBT community they purport to represent, there is no information at their site about this pending announcement.

While the board of directors think they're in charge of deciding _the_ Grand Marshal for 2013's Pride Parade, I have news for them. The Grand Marshal is WikiLeaks gay soldier hero Bradley Manning. There will be a rally at 6 pm today, at Harvey Milk Plaza in the Castro district, in honor of IDAHO, International Day Against Homophobia.

Members of Gays Without Borders and the Bradley Manning Support Network at the rally will call attention the global day of LGBT activism, the undemocratic policies of Pride and to declare Manning the People's Grand Marshal of 2013.

Here's the info about Pride's pending announcement. Apologies for the all-caps from the original:

FRIDAY, MAY 17
CALL TO CONFIRM:
TODAY THE SF PRIDE BOARD OF DIRECTORS IS EXPECTED TO ANNOUNCE THE 2013 GRAND MARSHAL FOR THE PRIDE PARADE BY NOON, FOLLOWING THE CONTROVERSIAL ANNOUNCEMENT AND THEN REVERSAL OF THE DECISION TO MAKE BRADLEY MANNING THE GRAND MARSHAL.
CONTACT: DAVID PERRY (415) 693-0583 OR (415) 676-7007 CELLPHONE
Posted by Unknown at 10:10 AM
Email ThisBlogThis!Share to TwitterShare to FacebookShare to Pinterest