100 LGBTs at May Day March in St. Petersburg Despite Gay Ban 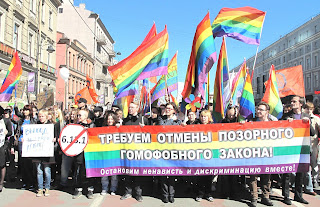 (Before marching, an estimated one-hundred LGBT activists assembled with their banned rainbow flags and pro-gay signs. The banner translates as : "Repeal the Shameful Homophobic Law! Let's Stop Hate and Discrimination Together!") 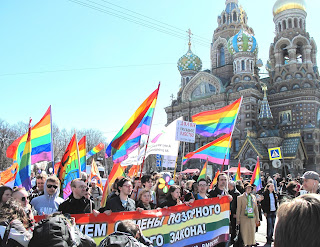 (Proud and loud LGBT activists parade past an orthodox cathedral on Nevsky Prospect.)

Polina Andrianova is one of the leaders of the brave advocacy group Coming Out in St. Petersburg, Russia, and she circulated a report and photos of courageous LGBT people defying "no promo homo" laws, and they did so along with others fighting for democracy, in the streets this week.

I find much to admire about the people and activism of Coming Out and other queers groups over there. They inspire me to keep on with my human rights struggles in San Francisco, and I am honored to share the words and images of our brothers and sisters standing up to dictator Vladimir Putin and his Kremlin. If anyone needs a reminder about the value and strength of solidarity and visibility, the action on May 1 is it.

From LGBT Russia, with love:

On May Day this past week, over 100 people marched down the St. Petersburg historical central avenue, with rainbow flags blowing in the wind and slogan were loudly chanted.

LGBT Russian were part of the larger Democratic contingent in the May Day March, consisting of various democratic groups and political parties. The march and rally lasted three hours.

Despite attempts by the police to ban deployment of rainbow flags at the beginning of the march, activists were able to pass along the entire route with rainbow flags and banners with no arrests.

Olga Lenkova, an activist with the  LGBT organization Coming Out, spoke at the end rally about the importance of solidarity: "Many people think that the problems of LGBT people are private issues. But this is not true. In a society that is ready to discriminate against one,  is a society that will discrimination against many. No one is safe from discrimination. We are being set against each other by our government, under the guise of concern for the morals of children, and myths about 'foreign agents'. But I want to remind all of us: solidarity is stronger than repression!"

For many LGBT residents of St. Petersburg, there was elation at being part of the May Day March. They say it felt like Pride today on Nevsky Prospect. Today showed LGBT Russians that open demonstrations organized by us and with our allies are possible, despite the "homosexual propaganda" law and other laws clamping down on freedom of assembly and expression.