A grand time was had by all of the 150-plus people who stopped by at some point at Books Inc in the Castro district yesterday, Wednesday, May 22, Harvey Milk's birthday, for a reading from "An Archive of Hope", edited by Jason Edward Black and Charles E. Morris III. It was also a ninety-minute celebration of Harvey's life and legacy and the larger LGBT community.

This photo was snapped before the reading officially began. As the evening progressed, folks squeezed in behind the racks of books or sat on the floor. Some standees stayed only a short while, which allowed for other shoppers to listen in and the aisle leading to the back room was packed with folks craning their necks to see the panel of speakers. 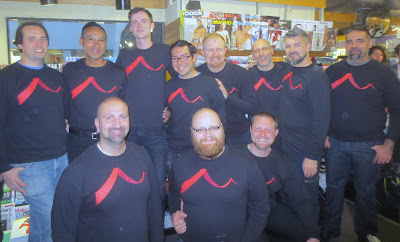 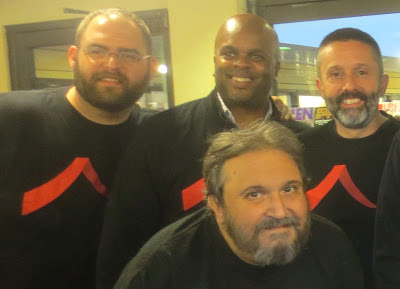 More than twenty members of the San Francisco Gay Men's Chorus were traveling around the Castro, spreading love and magic with their voices and smiles. At the start of the evening, we were entertained with a rousing rendition of "Happy Birthday" for Harvey. There we so many adorable chorus boys, I couldn't squeeze them into one photo, and for the top photo, when I asked for volunteers to get down on their knees to fit more of them into the shot, cries of "Me! Me! Me!" rang out. 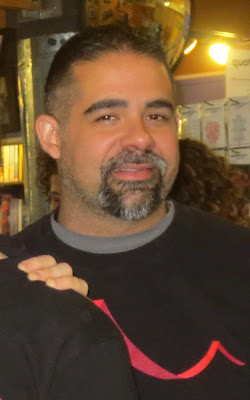 Difficult as it was to single one furry fella as my fave from the boys, this adorable dude and those backroom-eyes of his makes him my favorite. 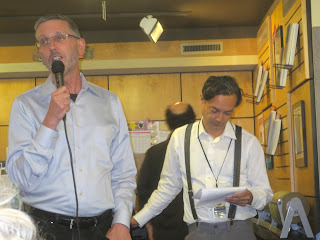 On the left is Gerard Koskosvich, archivist for the GLBT Historical Society, who made a plug for folks to check out their museum storefront on 18th Street and support the organization. Looking down at notes is Books Inc manager Ken White. The evening was a joint production between the society and the book store. 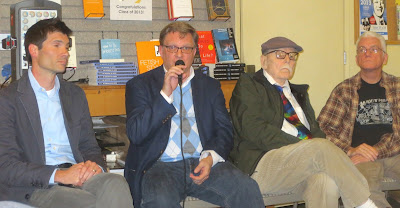 The panel of presenters, from the left. Editors Black and Morris, Frank Robinson who was Harvey's speechwriter, and Dan Nicoletta who worked at ye olde Castro Camera for Harvey.

When the floor was opened to comments from the audience, I spoke about the over-abundance of public memorial sites and plaques in San Francisco for Harvey and other late gay male leaders, and the dearth of public space memorials for our lesbian sisters. Said I could think of only two. The plaque for the late bar owner Rikki Streicher at the Eureka Valley Recreation Center and Jane Warner Plaza, named for the police officer who died of cancer.

My plea for more memorializing of lesbians met with some applause and an endorsement from Morris, seen holding the mike. 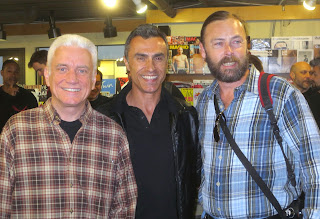 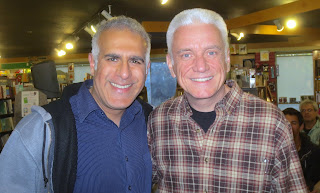 The top photo shows Danny, and his friends Peter and Garrett. On the bottom is Jay Blotcher with Danny. 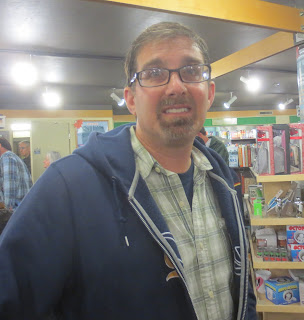 Here's Rene Puliatti, who introduced himself to me as an ACT UP/New York member for a short time back when several ACT UPpers staged a protest at Hoffman-La Roche's old headquarters in Nutley, New Jersey. 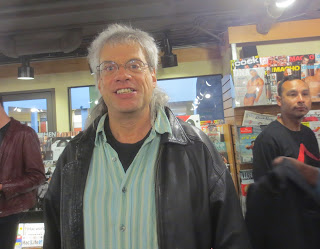 Jerry The Faerie made an appearance and we chatted about building a large crowd for the Marching 4 Manning contingent on June 30 for the SF Pride Parade up Market Street. We'll be assembling at 10 am that Sunday at Howard and Beale Streets. Come out and join us!

Thanks to everyone for making the night an only-in-San-Francisco experience and so memorable.
Posted by Unknown at 5:01 PM
Email ThisBlogThis!Share to TwitterShare to FacebookShare to Pinterest