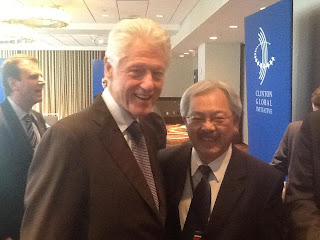 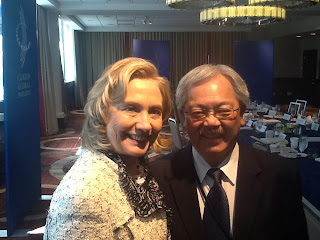 San Francisco's jet-setting elected officials continue to rack up airline miles and bringing home smiling pictures of themselves posing with important people. How all this travel of the Mayor, the City Attorney, the District Attorney and their staffers, and various members of the Board of Supervisors and their staffers, directly benefits us taxpayers is never explained when they return home.

On Monday, May 6th, I filed an Immediate Disclosure Request with Mayor Ed Lee's office for public records about which staffers accompanied him and how much was the cost of the trip to taxpayers. Despite a request that the Mayor's many paid staffers get back to me with a simple confirmation they'd received the IDR, I've not heard from the Mayor's people.

While Mayor Lee's staffers have no time to inform the public about the costs to taxpayers of his and his staffers' junket over May 4 - 6 to New York City to attend the Clinton Global Initiative mid year meeting, they have posted photos of him with Bill and Hillary to his Facebook page.

I'd like to see Mayor Lee spend a weekend in heart of the Tenderloin, just like on a junket to Paris or New York or China, and meet with the locals and their leaders at meetings and over meals.

As we wait for that miracle, I'll settle for more transparency and media scrutiny of this latest mayoral junket.
Posted by Unknown at 6:12 PM
Email ThisBlogThis!Share to TwitterShare to FacebookShare to Pinterest

This man just loves to eat corporate Establishment ass. And before he became mayor no one knew him from Adam, and some still don't. Why is it important to him to have his picture taken with corporatist politicians?