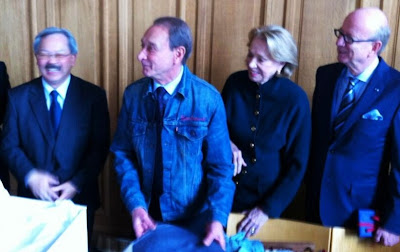 The San Francisco War Memorial & Performing Arts Center board of trustees is comprised of the following individual elites and social swells, according to the Center's web site:

It came as news to me to learn the Center is a City agency, subject to all sunshine laws and that means their meetings are open to ordinary citizens and taxpayers, and public comment is allowed.

Reading over minutes of their monthly meetings, the meetings run between 30-to-40 minutes, it's rare when a member of the public attends and speaks up, and agenda items pertain to rentals of the War Memorial Opera House, Davies Symphony Hall and the Herbst Theater inside the Veterans Building. All of those venues are overseen by the trustees of this board.

The trustees also grapple with best ways to spend their City-funded budget and it is their budget that I intend to address at tomorrow's meeting. It's budget-creation time at City Hall and I want to follow the public dollars that flow to the Center.

I also wish to observe how these elites conduct their monthly business. As friends and advisers to the Mayor and his administration, and people of wealth often in the papers at galas or written up on blogs when they fund and take junkets with the Mayor for a weekend of hobnobbing in Paris.

The Center's next board meeting is tomorrow, Thursday, May 9th at 301 Van Ness Avenue, 4th floor board meeting room, entry at the opera house's North Carriage Door which is on the courtyard side of the building. The meeting starts at 2 pm and public comment is the last item on the agenda.

I hope to see you there.
Posted by Unknown at 12:46 PM
Email ThisBlogThis!Share to TwitterShare to FacebookShare to Pinterest