Let's start my follow up report about the War Memorial and Performing Arts Center board meeting with this photo of union workers as they started to assemble on Van Ness Avenue before the meeting began. Local Union 6 of the International Brotherhood of Electrical Workers were protesting the pending awarding of a seismic upgrade contract for the Veterans Building to Helix Electric, an out-of-town contractor that doesn't hire local workers.

The unionists brought a huge inflatable rat, symbolizing Helix Electric, and staged a visible and occasionally loud picket line, that frequently drew the supportive honking of horns from passing truckers and car drivers along with waves of support from bicyclists. I estimate a good 50 folks were part of the picket and spoke at the meeting. 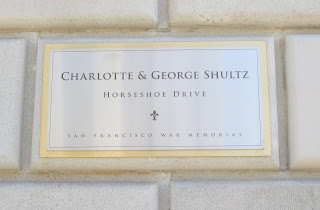 Since the War Memorial Opera House's security firm had blocked folks from entering the carriage side of the building from Van Ness Avenue, I had to enter from the Franklin Street side where this plaque was affixed to the facade. Who knew public property could be named the Charlotte and George Shultz Horseshoe Drive? 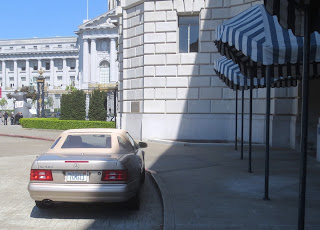 Officially, there's no parking allowed on the Charlotte and George Shultz Drive, but when Charlotte tootled up in her cream colored convertible Mercedes-Benz, she parked her car and walked with an air of entitlement into the building at 1:50 pm. I was made to wait until exactly 2 pm, the starting time of the meeting, before security cheerfully directed me up to the fourth floor meeting room.

Why were there no unionists lining up to get into the building? Were they already inside,waiting for public comment to begin?

The meeting had commenced before I got there, and seated around the table was Dede Wilsey, James Stafford, Bay Area Reporter publisher Thomas E. Horn, Wilkes Bashford, Nancy Bechtle, I believe the executitve director and secretary of the Center, and J. Michael Myatt was conducting the meeting. 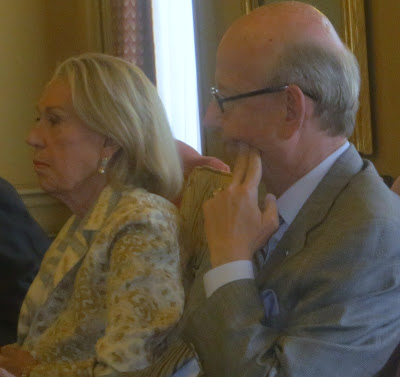 The biggest sourpuss throughout the meeting was Shultz. Every time I glanced at her, no matter which member of the public was speaking, she displayed a serious displeasure on her face. No attempt at all to hide her annoyance. Horn showed much boredom that almost matched Shultz's sourness. 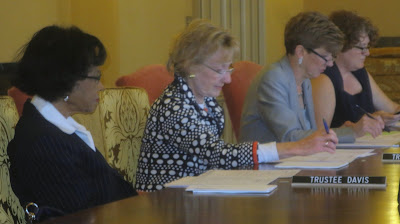 Board member and retired local news personality Belva Davis, left, sat next to Bechtle. The most fun part was when one union man had used up his two-minutes of public comment and said he had one more thing to say. "Are you THE Belva Davis? Because if you are, I grew up watching you on TV," he said. Ever gracious, she smiled and thanked him for his comment as laughter filled the room. 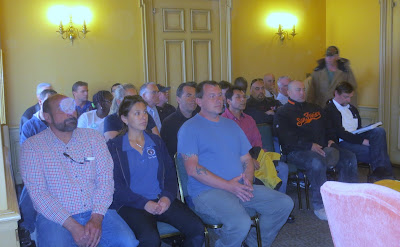 One union member told me that after they picketed, they were told by security about the limited number of seats for the public and they organized themselves to have 20 or so come in at first, then as each speaker got his or her two-minutes of public comments then would leave and another member would take a seat and wait to speak. The unionists worked with the security to make sure everyone who wanted to get in to address the board got that chance.

Before public comment began, Myatt welcomed everyone, explained the board's rules and thanked the union  members for their plan to rotate out after speaker and he promised all speakers would be heard.

By the way, in my comments, I asked the elites on the Center's board to keep in mind the tight budgetary times at City Hall and that taxpayer dollars going to the high arts, which I love, should not be at the expense of cutting healthcare or other vital social services, which I also love and depend upon. Of course, I also expressed solidarity with union men and women. 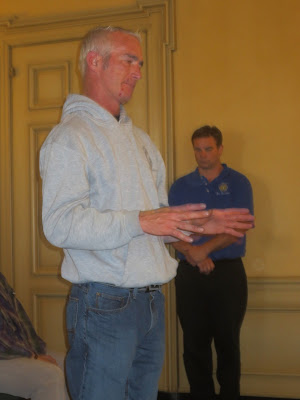 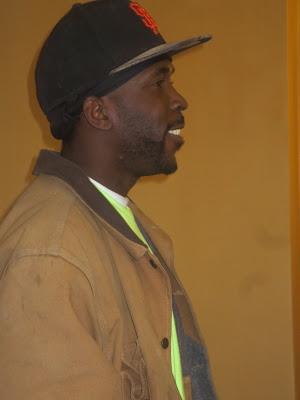 A diverse number of union members spoke about the board using its influence with the Department of Public Works, the city agency actually awarding the contract for the electrical upgrades at the Veterans Building, while laying it out what it's like trying to survive as blue collar workers in San Francisco, raise family or get an education, maintain healthcare access and occasionally go to the opera or symphony. Several unionists talked of their strong pride either having worked on one of the Center's venues or how their fathers and mothers had. 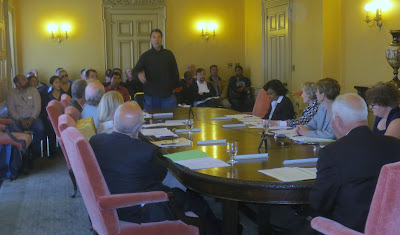 Sorry about the fuzzy texture of the image, but the lighting was weird in the fourth floor meeting room between the sunlight from the street windows and soft lights on the walls. In any event, public comment was conducted with speakers at one end of the board table, and board members expressed thanks to the general public for coming and speaking up. The meeting ending on a very upbeat note with lots of smiles all around.

Compare this scenario with the chaos and mayhem at the SF Pride board meeting on Tuesday night.


Posted by Unknown at 11:30 AM
Email ThisBlogThis!Share to TwitterShare to FacebookShare to Pinterest

"Who knew public property could be named the Charlotte and George Shultz Horseshoe Drive?" Take a look at the sponsors and speakers at last year's naming ceremony:

D'oh! I should have known you would have the answers to my questions about who knew the horseshoe drive at the Opera House had been renamed for Charlotte and George Shultz. Thanks for the info and you keeping me and others informed about Civic Center happenings and the people behind them.