[Feel free to use any or all of the images, but please give credit to Gays Without Borders. Click to enlarge.] 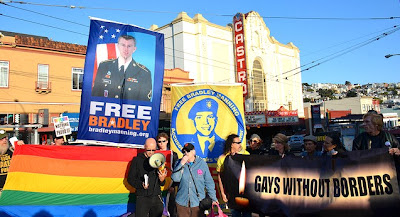 Several leaders who spoke flatly stated Bradley Manning is the People's Grand Marshal, regardless of the b.s. from Pride.

With the iconic Castro Theatre marquee serving as backdrop, activists rallied for just over an hour, displaying the Gays Without Borders banner, a rainbow flag and two Free Bradley Manning banners. Among the speakers was Sue Englander, center, in blue shirt holding the mike, of a local political club. She called for more activism to make SF Pride a democratic group that shares power with social justice advocates. 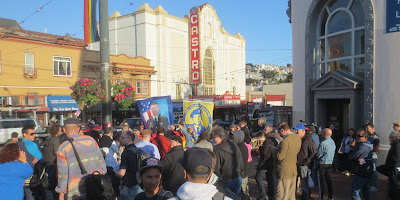 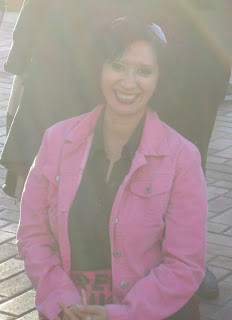 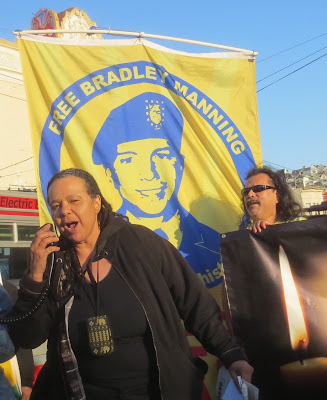 The top photo is of Nancy Mancias from the Code Pink organization of peace and freedom advocates, who Tweeted from the rally. The bottom picture shows Shinay, a longtime anti-racist lesbian activist, speaking about our solidarity from San Francisco's queer community to our LGBT brothers and sisters around the globe also participating in today's IDAHO events.

Nancy and Shinay have been involved with Global Exchange, the group that has kindly offered use of their meeting room to the ad hoc coalition of individuals and organizations working to democratize Pride. 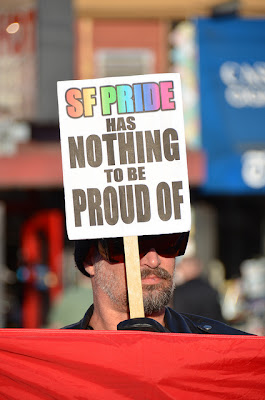 A message the Pride board and executives need to hear. Holding the sign is nudist leader Mitch Hightower, who is part of the Grand Marshal, Not Court Martial ad hoc group that sprang up from Pride rescinding the honor of Grand Marshal originally given to Manning. For more info on the group, go to our Google Group here. 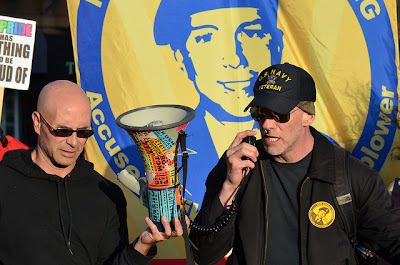 From ACT UP/San Francisco came Dean Ouelette , holding the bull horn as gay U.S. Navy veteran Greg Scott speaks as former military service member who see Manning as a hero to the armed forces, the gay community and all of America. 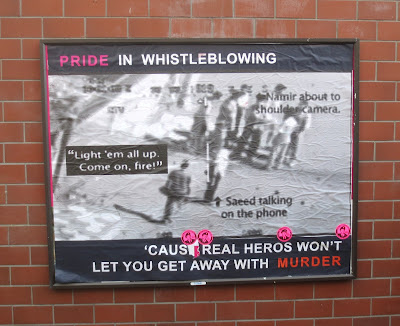 How's this for political urban redecorating? Unknown persons earlier in the day altered the large billboard next to the escalator in the bowl of the Muni station's exit. Instead of an from Corporate America, thousands of public transit users saw an ad with this text:

Pride in whistleblowing, 'cause real heros won't let you get away with murder.

Now that's Pride you can be Proud of!

The words surrounded a still image grabbed from the video Manning leaked from a July 2007 deadly incident where American helicopter killed twelve people in Baghdad, including a photographer and driver with Reuters News.

Many big thanks to everyone who attended tonight, spoke and cheered, held signs, distributed literature, snapped pics and shot video and made sure San Francisco again kept its commitment to IDAHO and shared our solidarity with our lesbian, gay, bisexual and transgender family around our planet.
Posted by Unknown at 11:55 PM
Email ThisBlogThis!Share to TwitterShare to FacebookShare to Pinterest