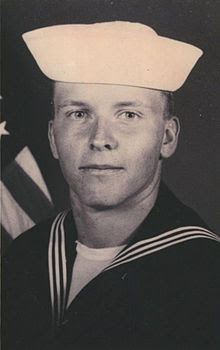 It was twenty-years ago this week, on May 27, that Terry Helvey was convicted for the murder of fellow U.S. sailor Allen Schindler, pictured, by a military court in Japan. Schindler was brutally murdered by Helvey and the accomplice Charles Vins, who received a sweetheart deal from Navy prosecutors in exchange for his testimony against Helvey, who was sentenced to life in a military prison.

In 1992, Schindler came to terms with being gay and in the armed forces when open homosexuals were barred from service, and he went public on his ship the USS Belleau Wood about his same-sex orientation. Helvey had a hatred for Schindler and harassed on the ship and in the Sasebo, Japan, port where they were stationed.

Schindler's pleas for help from the captain of the ship, Douglas J. Bradt, were ignored and he was never held to account for failing to rein in Helvey's loathing and bullying of Schindler.

That bullying eventually led Helvey to stomp Schindler to death in October 1992 in a public restroom in Sasebo.

The Vins sweetheart deal and the case up to that point had been covered up by the Navy, and the story eventually became news when U.S. Stars and Stripes reporter Rick Rogers broke the story.

I advocated for justice on behalf of Schindler, a young gay man who had his whole life ahead of him, and traveled to Japan twice thanks to the support and generosity of many friends and strangers. All of the folks who demanded justice, including Schindler's mother Dorothy Hadjys, banded together to go up against the Department of Defense and made sure that Schindler would rest in peace.

Sometimes, I think that had he not been senselessly murdered Schindler would have received an honorable discharge from the U.S. Navy as he wanted and become an activist. The courage he showed in coming out in such a hostile military environment leads me to think of his potential to be an activist was cut short.

Allen Schindler is remembered for being a hero and martyr, and good kid.
Posted by Unknown at 6:08 PM
Email ThisBlogThis!Share to TwitterShare to FacebookShare to Pinterest

Has it really been 20 years?

I don't know that there would have been justice at all without your efforts. Thank you.

Not only did you help achieve justice in this case, Michael; through your work on this issue, you also helped educate the radical queer left about the perils of military homophobia, and helped galvanize the national movement around "lifting the ban." The tragedy of Schindler's murder marked a turning point in how queer communities perceived the issue. Without his sacrifice and your efforts, I wonder if queers in uniform would yet be free to serve openly.