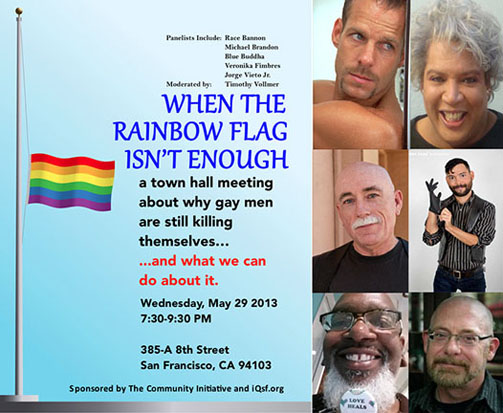 A forum about suicide in the gay community takes places tonight, Wednesday, May 29 starting at 7:30 pm in the meeting room located at 385-A 8th Street near Harrison next door to the Mr S Leather store in San Francisco. Titled "When the Rainbow Flag Isn't Enough", the forum promises a lively discussion with a panel of diverse activists. It's sponsored by the SF Gay Men's Community Initiative. 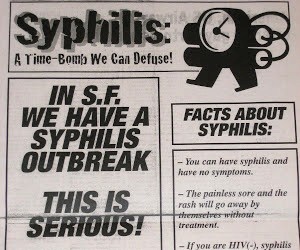 One factor I hope is on the agenda is the damaging impact of the stigmatizing, fear-driven and distrust-sowing social marketing campaigns that have targeted gay men for the past 15 or so years. I have long criticized the needlessly provocative and offensive ads, largely because they are all based on the assumption that gays are selfish, uncaring and sexually reckless.

There has not been a single social marketing effort congratulating HIV positive and negative gay men of a certain age for having survived the worst years of the AIDS plague, and for creating countless methods of prevention, caring for ourselves and our brothers, and a few service agencies. 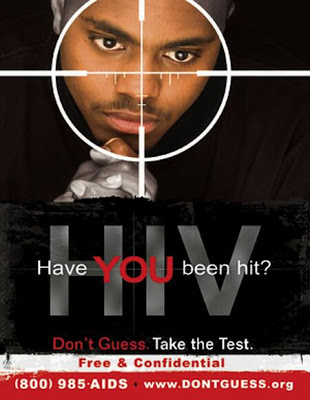 (An ad from the Philadelphia health department.)

We've be subjected to numerous ads flooding our media, public bus shelters, web sites and sexual gathering spaces with one message: there's something wrong with gays. Or gun imagery used to make a point to start a dialogue about health and wellness.

Ever seen a campaign lauding gay men for practicing safe sex, regular STD testing or driving HIV numbers down? If you have, share it with me please.

As if the stigma of the ads weren't enough, we've had an endless parade of AIDS Inc executives and San Francisco Department of Public Health officials manipulating data and stats supposedly showing gays don't give a damn about our wellness or each other. 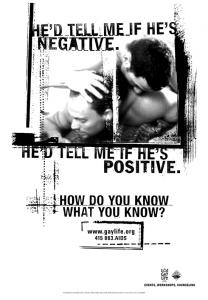 (SF AIDS Foundation ad where the point was to make gays distrust their sexual partners.)
We've endured public health authorities bemoaning fewer AIDS deaths thanks to protease inhibitor cocktails, because a reduction of funerals makes HIV prevention harder without the fear factor. At times, it's seemed like the authorities wanted more gay men to die.

There's also the matter of the gay bathhouse ban in San Francisco, created because of the myth that we can't be trusted with private spaces behind closed doors for sexual liaisons. We are currently subjected to sexual monitoring in the sex clubs and it was easier to lift the ban on gays in the military than it is to lift the gay bathhouse ban in San Francisco.

I'm saying all of these factors should be taken into account when debating what societal elements may contribute to gay men feeling their lives are worthless and leads them to kill themselves.

Let me close with a few comments made in 2005 by the late gay thinker Eric Rofes about some of these concerns that I believe should be part of the discussion tonight, with bolding added:

I think more than anything we need a few years of “time out” from directive AIDS prevention work for gay men. We need to get away from all the messaging, all the marketing, all the “crises of the week” used to terrify gay men into sexual sterility [...] Frankly, many of us have forged our own “time out” from all of the violence sent down to us by AIDS prevention. Many gay men do their very best to avoid the messaging, avoid the social marketing, avoid getting caught up in the drama of crisis about our sex [...] What effects does the colonization of bodies and desires have on a people when it is allowed to go on for 25 years? [...] The use of social marketing as the primary tool in HIV education and prevention has been a disaster with consequences we never imagined.
Posted by Unknown at 12:15 PM
Email ThisBlogThis!Share to TwitterShare to FacebookShare to Pinterest

From DC, my friend and longtime health writer Bob Roehr offers another point of view about HIV related ads and other matters:

In this analysis I think you conveniently ignore all of the sunny ads for HIV drugs by pharma – which at least equal and probably far surpass in number, intensity, and impact the public health campaigns you cite as being negative. In fact, you have long, and rightly, criticized many of the pharma ads as painting too rosy a picture, like morning again on the mountaintop and competing in a triathlon.

The argument also ignores the fact that much of a younger generation, views getting infected with HIV as not a big deal rather than as a stigmatizing event. They haven't reached that conclusion because of the negative ads you cite.

If the “stigmatizing” ads were having an impact on the broader population, we would expect to see a reduction in new infections among the gay community. While that may be the case in San Francisco, it certainly is not the case on a national level where gay men/MSM is the only category that shows an increase in new infections.

I'm not aware of any suicide data among those who are HIV positive (though that doesn't mean it doesn't exist). But the fact is, the peak in suicides later in life, primarily among men, is related to the occurrence of major illness. So one would expect it to be higher among the aging HIV+, particularly those who are not controlling their infection well.

Perhaps a better focus would be to push for better access to mental health services, particularly those related to depression. Depression often is an underlying factor in suicide, and often in major illness. Destigmaizing mental health and improving those services would seem to be a more productive line of activity.

There is no way to put lipstick on this pig:

"Gay, bisexual, and other men who have sex with men (MSM)a represent approximately 2% of the US population, yet are the population most severely affected by HIV. In 2010, MSM accounted for 63% of all new HIV infections, and MSM with a history of injection drug use (MSM-IDU) accounted for an additional 3% of new infections. That same year, young MSM (aged 13-24 years) accounted for 72% of new HIV infections among all persons aged 13 to 24, and 30% of new infections among all MSM. At the end of 2010, an estimated 489,121 (56%) persons living with an HIV diagnosis in the United States were MSM or MSM-IDU." http://www.cdc.gov/hiv/risk/gender/msm/facts/index.html.

That being the case, it's understandable that public health authorities use overly-dramatic PSAs to get the message out there, but I think that the people they are trying to reach simply block it out. Over the years, I have seen many public health campaigns around sexual health, some more effective, some less. The Sisters were among the first, and I see that the "Healthy Penis" is being restored.

There is a limit to what the authorities can do to change behavior. If people want to kill themselves by having numerous, unsafe hookups, that's their choice.