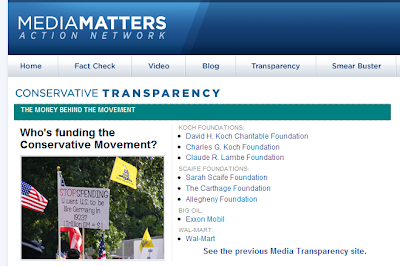 This post follows up on my post from Tuesday about Media Matters omitting their three-most current IRS 990 filings from their site.

Media Matters, a spin machine for Democratic Party leaders and causes, pretends to be a media watchdog when it's really more of political operation pushing an agenda backed by its funders. And who are the funders behind Media Matters? The answer is not transparent at their web site.

However, this group headed by out gay conservative-turned-moderate David Brock has an affiliated Action Network that does a great job providing fiscal transparency for conservative leaders, foundations and recipients of grants from the like of the Koch and Scaife foundations.

Click here to start digging through the comprehensive documents and on lots of right wing operations.

Kudos to Media Matters for tracking the money and persons at the top levels of the conservative movement, but how about getting Brock and his colleagues to disclose who is funding their operation?

It's great to have them keeping tabs on the millions of dollars flowing through conservative think-tanks from right wing foundations. What would be as great is if Media Matters voluntarily became fiscally transparency about which liberal or moderate Democrats individuals and nonprofits are funding their projects.

One source of the money behind Brock and Media Matters was reported by Jim Rutenberg in the New York Times in May 2004:

Among Mr. Brock's donors is Leo Hindery Jr., the former cable magnate; Susie Tompkins Buell, who is co-founder of the fashion company Esprit and is close to Senator Hillary Rodham Clinton of New York, and Ms. Buell's husband Mark; and James C. Hormel, a San Francisco philanthropist whose appointment as ambassador to Luxembourg was delayed for a year and a half in the late 1990's by conservative lawmakers protesting what they called his promotion of a "gay lifestyle." ...

There needs to be a serious updating and expansion on those bits of funding info from the NY Times and Source Watch, by reporters and media outlets unafraid of incurring the wrath of Brock and his group.

Media Matters should immediately address their current opaque sources of revenue, starting with with posting their three latest IRS 990 filings and details about who previously and currently donates the millions that keep it in business.
Posted by Unknown at 12:35 PM
Email ThisBlogThis!Share to TwitterShare to FacebookShare to Pinterest

Gee, I wonder who else could be bank rolling Media Matters? Maybe someone who has a sizable amount of capital, possibly a wealthy wallstreet investor who was convicted of insider trading in France, not to mention the immoral and unethical means by which he achieved his wealth, or how he collapsed whole country's currencies for his own self interests so that many may suffer. Good old boy George Soros