On my way to the Bicycle Advisory Committee meeting last night, I saw another biker getting citation from a motorcycle cop, on South Van Ness just south of Market Street. Click here for my post last week on a different biker and cop going through the same routine.

Some urban biking advocates have demonized the San Francisco Police Department for what appears to be targeted enforcement, and I wonder if they are familiar with chapter five on enforcement and safety, page five, which calls for such a campaign.

Biking culture in San Francisco needs to curve out a large niche promoting standards of safety on the part of bikers - fully stopping at red lights, slowly down in the presence of pedestrians, signaling when making turns - as part of comprehensive plan to lessen the current dangers posed by bikers.

But I digress. I asked the helmet-less biker why he received a ticket from the police officer and he said it had to do with failure to stop at a red light. He rode off down Market Street and made it to the advisory committee, where I told this tale and mentioned I snapped pix of the episode.

Here are my pix: 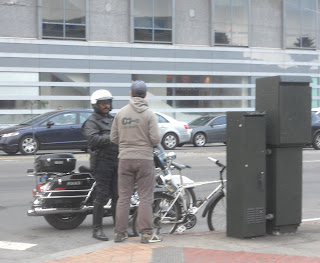 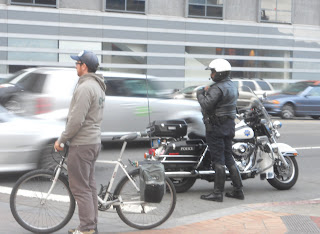 Posted by Unknown at 5:36 PM
Email ThisBlogThis!Share to TwitterShare to FacebookShare to Pinterest