This will be shocking news to gay American hero Frank Kameny, not to mention Kevin Naff, but he's the editor of the Washington Blade. Says who? Says the DCist in their roundup of interesting local news last Sunday:


WAMU does a Q&A with Washington Blade Editor Frank Kameny. Since its debut in 1969, the Blade has aggregrated thousands of photographs which they're now digitizing and archiving online. You can check out some of Kameny's favorite photos, including what gay pride in D.C. looked like in 1976.
Clearly, this is an error and Kameny is not editing the Blade, while Naff is, and lots of folks will chuckle when reading the mistake, but I have to say it's pretty sad that Alia E. Dastagir, who wrote the DCist item, and her editor didn't fact-check the item before publishing it.

Since no one has yet made them aware of their goof and a correction has not appeared, I'll contact the folks at DCist about the error. 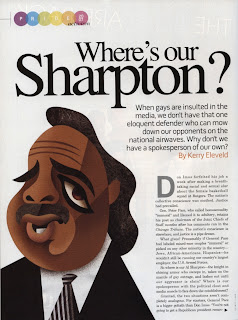 The DCist item reminds me of the two serious inaccuracies Kerry Eleveld, the former Washington bureau chief for the Advocate and now senior fellow for the Equality Matters site, wrote in her June 19, 2007, magazine piece about gay leaders:

But most of the leaders of this initiative [for a mass movement], such as Morty Manford, Marty Robinson, and Frank Kameny were lost to AIDS in the '80s and '90s. ...

Of course, Kameny not only is alive and well, he didn't die of AIDS. On top of Eleveld's inaccurate reporting, the Advocate's abysmal institutional movement knowledge and fact-checking methods, the magazine ran this photo of Kameny with the erroneous info repeated. 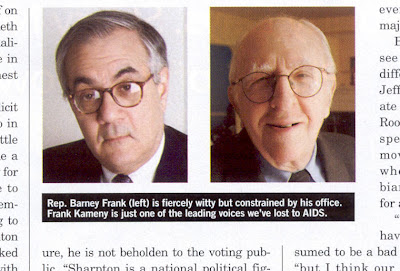 The Advocate, of course, acknowledged their error and Kameny with his customary good humor and grace, forgave the magazine and Eleveld.

I'll have an update to share later today about my campaign to persuade the Obama administration to honor Kameny with the Presidential Medal of Freedom, an honor he more than earned quite a long time ago.
Posted by Unknown at 4:09 PM
Email ThisBlogThis!Share to TwitterShare to FacebookShare to Pinterest