In recent years, several gay and AIDS groups have voluntarily have started posting their three most-current IRS 990 tax filings, along with financial statements and annual reports, on their web sites. The reasons for this fiscal transparency are due to the many requests the groups received for those documents, and it's easier to simply post them, while these nonprofits also uphold their voluntary commitment to transparent practices.

The press and political watchdog nonprofit Media Matters, headed by out gay man David Brock, shown above in a photo from Heist-The Movie.com, is not following the example of the gay and AIDS charities. I looked at the About Us page for Media Matters yesterday because I expected to find their IRS 990s there and available for easy public inspection. No such luck.

Not only does Media Matters omit their tax filings, but they also fail to inform readers that the forms are posted at the Guide Star site, for free, and there is no link from the watchdog's site their IRS 990 at Guide Star. Here's a screen grab of Media Matters' About Us page and its meager details: 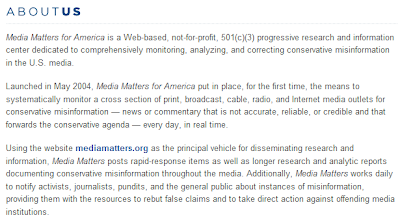 This link takes you to the 2007, 2008 and 2009 tax filings for Media Matters, posted at the Guide Star site (registration required).

Board members include the wealthy out gay Democratic Party donor Jonathan Lewis, heir to the Progressive Insurance fortune. You may recall that Lewis was the funder that launched the Astroturf gay advocacy group GeEqual, with at least $500,000 in start-up funds.

I emailed several press reps at Media Matters, asking for answers about why their site omits their IRS 990s. I included a link to the NYC gay community center's page for their financial reports, showing how they provide fiscal transparency, as an example Media Matters could emulate:

Unfortunately, the press reps for Media Matters have not responded to my request for details regarding their lack of fiscal transparency on their site. If they decide to share some answers, I'll post them here.

Upon reflection, I have re-thought describing Media Matters as a watchdog. They're not. What they are is Democratic-affiliated pushing party politics, while sucking up millions of dollars from unknown donors. I should have said the group is a partisan spin machine masquerading as an independent observer of the news.
Posted by Unknown at 11:48 AM
Email ThisBlogThis!Share to TwitterShare to FacebookShare to Pinterest