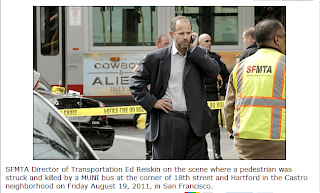 (Photo credit: Michael Macor, SF Chronicle.)
The new head of the San Francisco Metropolitan Transportation Agenc, Ed Reiskin, was on the scene after a tragic Muni accident occurred in the Castro, Supervisor Scott Wiener's district, on Friday afternoon. Missing in action was Wiener, both on the scene and on the web.

In his capacity as a supervisor, he is a member of the County Transportation Authority and the Metropolitan Transportation Commission and he had nothing to say to the press about the deadly run-in of a Muni shuttle and a pedestrian named Emily Dunn, age 23 near 18th and Hartford Streets.

Dunn was declared dead at 2:45 pm, according to the San Francisco Fire Department.

Check out the links and see how Wiener's name is absent:

Not only is Wiener not quoted, none of the stories say a thing about attempting to reach him for a comment. How sad is that?

Wait, there's more. It wasn't just text-driven reports to render Wiener invisible, he also can't be found in this three-minute report that ran on KGO-TV:

Fifteen-hours after Dunn was struck by the Muni bus, Wiener on his personal web site issued a bland, terse statement about the loss of life on the street in his district that compounds his dereliction of duty the day of the fatal accident:

This is terrible. My heart goes out to the victim and her family. I know that Muni and SFPD will perform a thorough investigation and take appropriate action.

Will he be asking tough questions about pedestrian safety issues in the Castro, calling to examine the use of the shuttle bus or planning a community meeting to address these and other issues, such as the safety trainings for Muni drivers and the record for the driver at-fault in this fatality?

What about bringing concerned Castro citizens to a public forum, with representatives of the SF MTA executive circle, Muni management, the drivers' union and pedestrian safety promoters? Does Wiener see that as part of his democratic engagement with the district?

Oh, and why was he MIA at the accident scene and did it take 15 hours for him to make the most bloodless of public expressions of sympathy, and go out of his way to show solidarity with two bureaucracies?

Dunn's death in the Castro on Friday is the ninth such fatality and demand more of an assertive response and plan of action from the man who is the gayborhood's supervisor.
Posted by Unknown at 10:05 PM
Email ThisBlogThis!Share to TwitterShare to FacebookShare to Pinterest