Equality Matters is not Transparent;
Questions for Socarides

(Richard Socarides. Credit: Monica Simoes, Broadway World.)
The David Brock empire is comprised of many political spin machine components and is not a transparent operation, by any standard. His most famous entity is Media Matters, which I blogged about here and here regarding omitted IRS 990s and fiscal opaqueness.

Let's now turn our gaze toward the gay arm of Brock's empire, Equality Matters. Started by the leading gay anti-Obama pundit Richard Socarides, who stood by silently when he was a domestic adviser to President Clinton as he signed DOMA and DADT, Equality Matters enjoyed a great media debut with a stenographic story in the New York Times in mid December 2010 authored by Sheryl Gay Stolberg.

The NYT omitted relevant facts about the budget for Equality Matters, how much Socarides is being paid to run it, if it has a board of directors and how average gay folks beyond the usual Gay Inc suspects feel about yet another gay organization forming without any stated democratic engagement principles involving folks beyond Gay Inc. 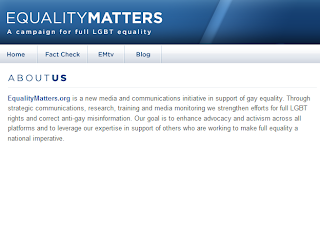 I believe their About Us page is the skimpiest such page of any major Gay Inc group. The FAQ contains more blathering, none of it relevant about fiscal transparency or any sort of advisory board oversight.

The only info I could locate on the web about Equality Matters having such a board comes from Pam Spaulding, a lesbian of color blogger based in North Carolina, who had this to say back in December:

I must also give full disclosure -- I've been asked to serve on the advisory board of Equality Matters and I've accepted because of the outstanding work Media Matters does as a watchdog - it's a welcome extension of its successful model and it goes without saying that friends of the Blend Richard Socarides and Kerry Eleveld are stellar voices backing this initiative up under the MM umbrella. ...

Pam's disclosure was in response to a rather empty, in terms of transparency, December essay by Socarides about his new group. Want proof Socarides does not deliver even basic transparency? Here it is:

Another important factor in the evolution of where we are today is the democratizing impact that "new media" and the Internet have had on the equality movement. Bloggers like John Aravosis, David Mixner, Pam Spaulding, Joe Sudbay and Andy Towle have been an invaluable resource, providing up-to-date, provocative information to the gay political community that it could not get elsewhere. ...

Put aside the fact that those bloggers are either friends with Socarides or treat him with great deference, and notice how he fails to mention that Pam is on his advisory board. Heck, he does not say a thing about that board and there is no page for the board, forget about the names of who is on it, at the Equality Matters site.

Besides Pam, who serves on the board? What is their role in the project and how do they guide the agenda of Socarides? Does the advisory board hold public meetings or ask for comments and criticism? What about Socarides holding any town hall sessions to hear back from the gays he claims to represent?

On that last question, I've long wondered who comprises Socarides' constituency. Ever since Obama was elected to the White House, he's done a good job of representing gay Clintonistas and attacking the president for not doing more to undo the hateful DOMA and DADT problems created when he advised Bill Clinton.

So what exactly is the gay agenda for Equality Matters? The same as every other Gay Inc organization. Pushing for gay marriage and gays in the military. Oh, and spinning for the Democratic Party as the 2012 presidential race heats up, while attacking Fox News and conservatives. Those aren't necessarily bad things, but we already have plenty of groups and bloggers working on the same issues.

How about health care coverage for all LGBT Americans regardless of marital status? Cutting the Pentagon budget, ending our wars in Afghanistan and Iraq, bringing the troop homes, and redirecting defense billions into affordable housing for low and middle income gays? An all-out campaign pressuring Democrats and Republicans to enact federal employment protections for every lesbian, gay, bisexual and transgender citizen?

These important matters for many gays, along with addressing the dearth of democratic engagement from Gay Inc groups including Socarides', are missing from Equality Matters' agenda.

This group has existed for eight months and hasn't bothered to provide the LGBT American community it purports to serve and represent with minimal fiscal transparency, details about governance and structure, names of advisory board members, and genuine accountability.

How much more time does Equality Matters need before realizing transparency matters and they have to deliver it?
Posted by Unknown at 12:44 PM
Email ThisBlogThis!Share to TwitterShare to FacebookShare to Pinterest